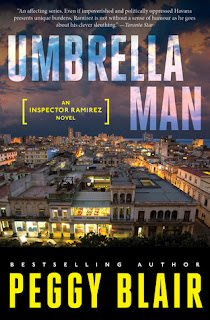 Inspector Ramirez' fourth adventure is a quick and satisfying read. I've really enjoyed the first 3 books in this series, all set in Cuba and featuring a detective who can see the ghosts of the murdered victims whose deaths he's investigating.

In this volume, Russia and the US are both running secret spy manoeuvres which affect the progress of Ramirez' apparently straightforward murder case. The book opens in a James Bond-like chase through the streets of Havana, with a shocking conclusion. Ramirez is called in, and the story starts to unravel in ways he never could have predicted.

A Russian agent arrives in Cuba soon after, letting the government know that the CIA has an agent in Cuba planning to kill Raul Castro. But is that really why he is there? And just who is this CIA agent? And why are multiple airline staff turning up dead in mysterious circumstances?

Blair's mastery of intricate plotlines means that I didn't even guess at the extent of the machinations until the very end. And yet it all seemed to make sense once it was explained -- the very different storylines all connected in a great ending -- which was very cinematic in scope, and again, quite spy thillerish.

This was a bit different from her first books, a little more action-oriented, but was plausible and very fun to read. The Russian agent in particular was a great creation, entertaining and yet totally ruthless at the same time. As always, the evocation of daily life in Cuba is excellent, and educational. I loved the way the characters are deepened in this novel, from Inspector Ramirez himself, and his wife and family, to Hector Apiro (the coroner) and his girlfriend Maria, to side characters like Ramirez' coworkers and various locals, like his grandmother's contemporary, Mama Loa. Another subplot in this novel is Ramirez' loss of the ability to see ghosts, something he thought he didn't want anymore -- until he can't. He ponders this throughout the book.

All in all, you'll find warmth, friendship, terror, clandestine plots, violence, explosions, and true love in this story. It's a perfect summer read.

Leonardo Padura's Mario Conde mysteries are set in Cuba as well, and feature a world-weary policeman trying to solve crimes despite a corrupt government. This author is Cuban so there are many fascinating details included in his stories.

If daily life in a different culture is what appeals, try Argentinian writer Claudia Pineiro, who writes literary crime novels that focus on domestic darkness.