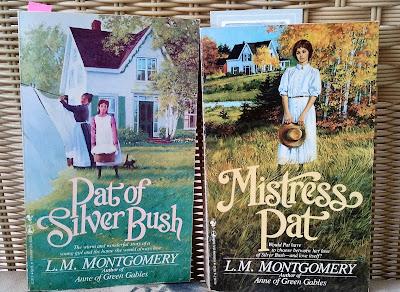 The last few weeks I've been slowly rereading this duo of books by L.M. Montgomery. I recall enjoying them when I was much younger, though I didn't really grasp Pat's pathological fear of change then. This time around, while I was often impatient with the emphasis on this characteristic of Pat's, I also understood her melancholy at how fast time was passing, how quickly things changed, how time wouldn't just stand still for one minute so she could get a grasp on it.

I also knew, this time around, that L.M. Montgomery felt that Pat was most like her, of all her heroines. That she was going through some dark times as she was writing these books, and Pat's feeling of everything being cursed by being connected with her was part of Montgomery's own fear. Pat loses her friend Bets in the first book to sudden illness, and her next friend Suzanne Kirk in the second book to sudden marriage - both of these seemingly random occurrences reflect Montgomery's own sense of uncontrollable loss at this time in her life.

Pat's resistance to change is really her most observable characteristic. And yet at the same time these books seem changeless. Pat spends 10 years doing much the same things, for the whole second book, and it's notable how often spring turns to summer turns to autumn, how frequently she is gazing at a sunset as the day ends. Every now and again there is a little bit of self-awareness, a little glimpse at her loneliness and dare we say boredom, a glimpse that she pushes away to continue on with the same routine. Her childhood friend Hilary Gordon (Jingle) is absent through most of the second book, although we all know what has to happen at the end. And unlike many other readers, I find Hilary much more appealing than Gilbert Blythe or Teddy Kent.

There are some odd elements in these stories. Pat's angelic mother, who doesn't really have a role in the book other than being invalided in her room, is largely absent as a character - Pat's true maternal figure is their Irish servant Judy Plum, who recalls other servants like Rebecca Dew from Anne of Windy Poplars, or Susan Baker from Rilla of Ingleside. Judy talks in a constant brogue (which, yes, gets a bit old quickly), and has her own particular way of saying things -- she is a "character". And yet she is the only one who truly understands Pat's sensitivity and character, and it is Judy who sets things right in the end.

Through both of these books, Pat is obsessively attached to Silver Bush, letting her connection to her home shape her life -- in the way she turns down a teaching career to stay home and run the show when her mother is invalided, in the way she rejects many suitors who would take her away from Silver Bush, in her loathing of her brother's wife who is seen as an interloper into their world. And in the end, it takes catastrophic, unavoidable change to convince her to leave PEI and admit who it is that she truly loves -- and it's not Silver Bush.

What I find most interesting in these books is the idea of tradition vs. modernism -- while Montgomery despised modernist writing & poetry, there is almost a breath of it here in Jingle's character. He loves Pat, but is also able to leave to follow his own dream of being an architect. He travels the world and takes in inspiration from other places, eventually building a house for Pat in BC. It's this sense that the world is becoming wider, and that in creating a literal firestorm at the end of this book, Montgomery isn't leaving Pat any choice; she'll have to join the modern world. Did she feel that way herself - that her past and her attachment to it couldn't be shaken loose, but that somewhere deep down, she wanted everything leveled, to be given a chance to start over? We will never know, but since she wrote these books while struggling through awful times in her life, perhaps a clean slate was a tempting idea, one that she gave Pat in the end.

Rereading these two as an older reader really gave me much more to ponder. Pat is not as fey, ambitious or clever as Anne or Emily, but there is something to her that is memorable nonetheless. And I found the domesticity in this much easier to take than in Jane of Lantern Hill, where it seems strange and overdone to me. If you've read any or all of these books, feel free to weigh in with your comments!