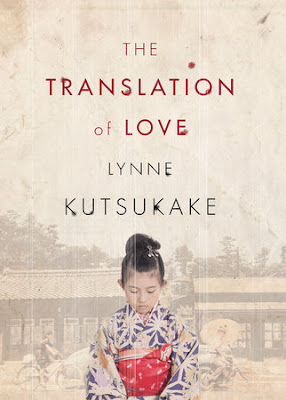 What's a girl to do when she is repatriated to Japan after the end of WWII, when her family is released from an internment camp and told to go East or go home? Post-war Japan is not a great place; still reeling from its wartime experience, still occupied by American forces.

Aya Shimamura has to find a way to fit into her new life, while her father is depressed, bitter and distant, and they are both mourning Aya's mother. She makes a friend at school, Fumi, who is trying to solve the mystery of her older sister Sumiko's disappearance.

The story then weaves together the stories of Aya, Fumi & Sumiko, and Matt Matsumoto, who works for the Occupation forces, translating letters sent to General MacArthur.  Fumi's decided that the only way to find Sumiko is to write a letter to General MacArthur, and Aya is going to help. The letter comes to the attention of Corporal Matsumoto, who haltingly decides he should help find Sumiko himself.

Anyone who knows me knows that letter writing is one of my 'things', and so the idea that an entire populace wrote letters to General MacArthur in the wake of the war, begging for help, offering gifts, and generally thinking of him as a kind of all-seeing dispenser of justice, was quite astonishing. I hadn't known this historical fact, and the pathos of some of the letters that Matt translates was quite strong. I was touched by this element.

There are many facets to Japanese life and identity in this book, both North American Japanese citizens like Aya or Matt, and those who have remained in Japan. How one retains a self in the face of circumstances differs according to each character. There are issues of women's status at this time -- Sumiko's choice to keep her family afloat is to work in the Ginza region in soldier's bars, Aya & Fumi come across many shocking situations in their search for her -- and there are issues of sexual identity, as Matt Matsumoto conceals his attraction to his Lieutenant. And of course there are issues of a larger cultural identity in postwar Japan.

But the story is really driven by the two young girls at the centre of it, and the characters' journey to a resolution is the important thread. This is an era that I haven't seen much of in fiction, and so it was a fascinating read. There is a bit of an emotional remove in the telling, which kept me from being totally swept away by the story, but it was a solid, historically intriguing tale. I wanted to know each character's story, and hoped that they'd all get a happy ending. I'm glad I picked up this debut novel by a fellow librarian.

For a story of a Japanese family who stayed in Canada, dealing with racism in a small Alberta town, try Prairie Ostrich by Tamai Kobayashi. While it's set  in a different era, it is also told from the perspective of a young girl, and features a character who is in love with the 'wrong' person.

If it's the idea of letters, hundreds of them, desperate to be read but never getting to their intended recipient that catches you, read Kyo Maclear's meditative The Letter Opener, which also focuses on issues of identity.