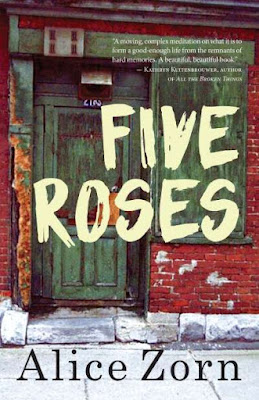 This new novel was an enjoyable discovery -- it takes place in Montreal, which always catches my attention. And I was pleased to discover that it's set in Pointe St Charles, an area that doesn't get a lot of fictional play (and which is overshadowed by the large illuminated Five Roses factory sign, where the title comes from). It's also an historically depressed area which is now being gentrified, which is clearly reflected in this novel.

But besides that particular setting, there was a lot that I loved about this book. It begins with Thérèse, a young and quietly sullen woman who leaves her cabin in the woods to move to Montreal briefly in the 70s. The repercussions of her brief stay shape the rest of the story, which then moves into the present.

And the present is wonderful. I loved all the characters that Zorn brings into play. We have Thérèse's daughter Rose; we have a youngish couple, Fara & Frédéric who've just bought a house in Pointe St Charles (all they could afford) in which a young man has hung himself previously; we have Maddy, of Polish background, who works at a bakery alongside her Trinidadian friend Yushi (at the Atwater Market - one of my own favourite haunts when I used to live in the neighbourhood); and then we have Leo, a young black homeless man who meets Rose in her art studio. They are all artists or employed in ways that aren't staid office jobs, and the flow of their days feels very natural.

Each of these people are connected, in ways that they don't know about, but that the reader begins to discover. I really enjoy this kind of story, when a group of disparate characters circle closer and closer to one another. While there is a tiny bit of coincidental overload here, it was still nearly perfect. The setting is so strong, and vital to the story. And yet the characters are also extremely interesting; they are well-developed and individual, having their own problems to face and their own differing personalities. I appreciated how each one is recognizable, since sometimes with large casts there are some too-similar characteristics that can confuse.

Because of the complications of the storyline and how each person's trajectory ends up crossing, I can't describe a plot. Basically, they each face a decision and the question of how to live -- and they each end up having to accept someone's help. The way that an unwilling dependence on others is so vital to their happy endings is really quite fascinating. Some may say that no man is an island, but Zorn shows how that works. Even the most incidental interaction can cause ripples in many lives.

This was a very enjoyable, complex read. Great as a virtual trip to Montreal when you can't get there in person.

Montreal's multicultural nature is also shown in other novels, such as Nikolski by Nicolas Dickner. While Nikolski is a little more fanciful, it also features a group of young people who don't know they are all connected, and they also wander Montreal (though more in the area of the Jean Talon Market, rather than Atwater).

Saleema Nawaz's Bone & Bread starts out in Montreal and later ranges to the Ottawa area, but it is also very character driven.  The leads are two eventually orphaned sisters who viscerally inhabit their busy Plateau neighbourhood. The book tells a rich story, scented with bagels rather than pastries, in this case.