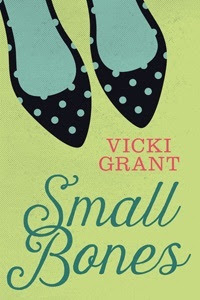 This novel is part of the Secrets series, a set of seven Canadian stories focused on, well, something secret.

It crossed my desk at the library & I knew I just had to read it, both because I really enjoy Vicki Grant's writing (her other books have all been clever and funny) and because the main character in this book is a seamstress. And I love sewing.

In early June 1964, the Benevolent Home for Necessitous Girls is destroyed, in one fiery night. Each of the grown-up orphan girls (7 in all) are sent out to make their own way in the world -- thus the 7 titles in the series. This book follows Dorothy 'Dot' Blythe, nicknamed for her tiny size as an infant (and given a suitable last name with classic orphan resonances). She is searching for her origins, with one clue; a coat that she was wrapped in the night she was left on the orphanage's doorstep, with a label reading "Howell's of Buckminster". Her journey is brief; she leaves Hope, ON and takes a train to nearby-ish Buckminster, ON.

Once she arrives, however, she finds that an envelope that held all the money she had in the world has been stolen on the train. Desperate, she sees a notice for an employee needed at the Dunbrae Arms, a summer resort, which includes room & board -- so starts walking. And encounters a cute boy who was on the train as well, now on his bike and offering her a ride.

Their meeting is fortuitous for the plot, and also for the reader, as it is a very amusing scene. Grant's sense of the ridiculous in the everyday is in full swing here, and so there are many moments where I was laughing aloud, not at any slapstick comedy but at the situations and behaviours that Dot finds herself faced with.

There are definite period elements; the popular dance at the time is the twist, the trendy clothing that they wear is noted, there are post-war effects still felt in town, and of course, the biggest one of all, there is a reason that Dot's birth was kept a secret all this time. One more 60's element that I noticed, which was also present in the last 60's teen book I reviewed (Eloise Jarvis McGraw's Greensleeves) is that Dot and her new boyfriend Eddie get pretty serious at the end; marriage is mentioned even though they are only 17ish. The way the plot wrapped up, all I could think was "how is she ever going to break up with him now?"

Despite the lightness and humour, Grant balances the secret of the story well, with tension and darkness involved. This is a youth-focused novel, however, and so she holds that line between the sadness of the past and the sense that Dot will prevail, and is not in too grave of danger. It's well done, amusing, charming, and appropriately tricky -- the reader won't figure out all the plot points very much faster than Dot finally does herself. It's a fun read, and other sewing readers will enjoy the stitching details, while anyone else will have a great time with the story & the way it is told.

For more secrets & lies uncovered by a teen girl working at a summer resort, try Jennifer Donnelly's A Northern Light, set in 1906 in the Adirondacks. Based on a true story, it places the heroine in the middle of an historical murder.

And of course, if you'd like to follow the other girls from the Benevolent Home for Necessitous Girls on their own journeys, read the rest of the Secrets series!