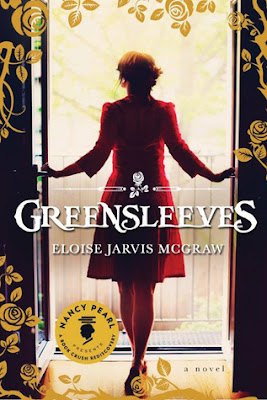 I picked up this book for two reasons: first, I've read McGraw's historical novel Mara Daughter of the Nile many times since I first discovered it back in my youth, and second, this has just been reissued thanks to Nancy Pearl and her Book Crush Rediscoveries project -- the teen version of her Book Lust Rediscoveries.  It has been impossible to find, so I was delighted to see it in her lineup. I've read and enjoyed so many of the Book Lust Rediscoveries, but this is the first one for "young readers" that I've picked up.

The main character, Shannon Lightley, is just 18, but she is very cosmopolitan, having travelled all over the world either with her actress mother or journalist father for most of her life (they are divorced). As the book opens, she is finishing high school in small town America, where she's been living for the past 2 1/2 years with her extremely normal aunt and uncle -- she wanted an American schooling and some stability. But she's found that it didn't agree with her, and now the only thing she feels is relief that high school is over -- and a complete lack of direction about what to do next.

She's about to give in and just go back to Europe like her father wants her to, but at the airport she just can't do it. She stays; luckily for her, her Uncle Frosty rescues her, takes her home, and finds some work for her to do for him. He's a lawyer, probating an excessively strange will, and wants her to check out the people named in the will and the possible circumstances that led to it. He intends her just to take a look around and maybe innocuously chat a bit, as a non-suspicious-looking young girl.

Shannon, however, goes all in: she gets herself a makeover, pretending to be Georgetta, a small town girl from the Midwest all new to the city; she gets a job at a diner across the road from the will-writer's former boarding house, and then moves right in to her old room. And begins to interact with all the persons of interest, finding out more about herself than about them in the process.

Of course there's a love story involved too. But of more interest, there's a safe suitor, and then one that is older and completely unsuitable -- the interesting thing is that Shannon allows herself to acknowledge the attraction between them (and try it out) without assuming that they are in love. It's something I don't see teen girls being allowed to do very often in fiction, especially not older fiction. I found it fascinating.

There are some drawbacks to my enjoyment of this one though; I know it's a period piece, but Shannon is 18, trying to decide if she wants to go to college or not, and is waitressing for the length of the summer and her undercover job. But when she finds true love, the educated boy worthy of her, in order for them to kiss and have a more serious relationship, they have to start talking marriage. Jarring to say the least! I understood Shannon's sense of being stifled and wanting more, especially in light of this taken-for-granted development.

But it is a delightful read, nonetheless. The period details make it just strange enough; Shannon's struggle to find her own way makes it current and relatable (even if her worries never have to do with having enough money for survival). I liked the physical details of clothing, hair, and domestic settings of all of the characters, and how those descriptions reflected their role and status. This is one of those familiar novels featuring young women who are both older and younger than their years, and very, very connected to art/drama/music and aesthetics in general. If I'd have discovered it when I was much younger, I think I probably would have loved it, and made it a reread. As it is, I appreciated it and enjoyed it, but it will never be as strongly embedded in my bookish heart as my other McGraw favourite, Mara, Daughter of the Nile is.

Madeleine L'Engle's Camilla reminds me of this novel, even if it is set across the country in New York. Camilla is fifteen, and is experiencing her parent's breakup, and is discovering that she has to leave childhood behind and become a grownup. While she is nowhere near as self-directing as Shannon Lightley, the story is all about her finding a way forward, and also includes various unlikable men who drive the action. And lots of deep thoughts.

Sari Wilson's forthcoming Girl Through Glass features Mira, a very young ballet dancer in New York City, who is suffering from her parents' divorce, and creates a controlled dance world for herself, full of secrets. She also finds an unsuitable older man, who changes her life path in unexpected ways. While this one is set more recently than the other two I've mentioned -- starting in 1977 when Mira is a girl, and flipping back and forth between her childhood and her contemporary life as a dance historian -- it has the same feeling of young artsy girl with troubled home life finding a future, and discovering who she really is. It just takes Mira a little longer to do so.