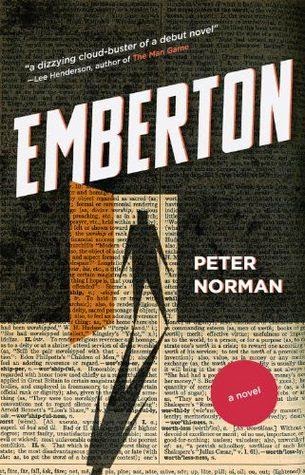 Lance Blunt can't read. Which makes it doubly strange when he is invited to interview for a job at the prestigious, venerable Emberton Dictionary. Desperate for work, he goes for the interview, and is hired -- but this is only the first mystery he encounters.

Keeping his secret proves difficult, as his two nearest coworkers keep sharp eyes on him. They're suspicious as to why this young person was hired at the insistence of old Mr. Emberton upstairs.

The Emberton Dictionary is a very strange place. Lance works in the sales department, but all they ever seem to do is to have rambling meetings. This leaves Lance lots of time to wander the mostly deserted building, discovering an indoor garden with an odd-smelling fertilizer, an echoing cafeteria that is avoided by nearly everyone, the boss' hidden office, a bookbinding room in the depths of the building, and the chugging engine powering the building...a lake of seething liquid language.

He also stumbles across a lovely (and yes, mysterious) woman in the Lexicography department, who ropes him into helping her search the vast archives for the secret of Emberton enterprises. This turns deadlier than they imagine.

With black humour, horror and imaginative fancies, Peter Norman mixes the banal, deadly atmosphere of tedious office jobs with the weirdness of gothic fiction. Lance is a confused Everyman who journeys unknowingly into what resembles one of the circles of hell. Bits of this story reminded me of the movie Fargo, others recalled Carlos Ruiz Zafon's Shadow of the Wind. Why is Lance involved? What is his connection to this menacing Emberton empire? The conclusion is surprising, and leaves us with a conundrum; what if what you desire most of all is only obtainable by siding with monsters? What choice would you make?

With unexpected turns in the story, and plenty of odd characters (some who perhaps were trying a little too hard to be the quirky sidekick of any quest tale), Emberton was an unusual, darker 'bookish book' than many I've read. No twee charms here; it's all daily tedium until Lance's curiosity gets him into the deep centre of the whole mess. Funny, cringe-inducing, a wee bit ponderous at times, this is still an original tale, perfect for the RIP time of year.

Anderson by Michael Boyce -- this one has supernatural elements, gothic weirdnesses, and sudden violence. It reminds me of Emberton in its approach to narrative, and in its inclusion of odd and unusual characters and unexpected elements. It feels like it takes the same tone to storytelling.

Shadow of the Wind by Carlos Ruiz Zafon (and sequels) -- translated from Spanish, these well-known novels are gothic tales of bookish Barcelona. Daniel finds a Library of Forgotten Books, works in his father's bookstore, and encounters dark, dangerous characters.

The Ink Drinker by Eric Sanvoisin (and sequels) -- translated from French, this juvenile series is utterly charming. It has the same quieter pace as Emberton, and a similar quirky theme of a bookstore owner's son who can't/doesn't read, until he meets a strange character who sucks the letters off pages with a straw...