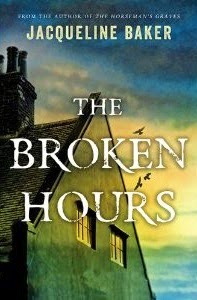 If you'd like a spooky read that has shades of Henry James or Edgar Allen Poe, and features the strange character of HP Lovecraft himself, you will find it in this novel.

Baker has taken her fondness for the darker side of life that was evident in her first two works -- both Canadian-set, realistic books -- and turned it on full power here, to create this eerie, ghost and/or haunted house story.

Arthur Crandle is unemployed and desperate, in 1936 when jobs are hard to come by. He finds a position as secretary and housekeeper for a reclusive gentleman that he knows nothing about, and takes it with no hesitation, even if "housekeeping" is a bit beneath him. It's a roof and a paycheque, and he has no options.

But when he arrives in the rain and cold in this little town, people shy away when they hear where he's headed. And when he does finally arrive...well, things are strange. He only communicates with his new employer by letter, never seeing him, just the ever-present light behind his study door -- a light that isn't visible from outdoors. Arthur feels a dark presence hovering in his attic room and particularly on the stairwell landing. He begins to see a white-clad woman in the garden. He notices a light in a dormer window that is in direct line with his own. And he meets a young, beautiful woman who shows up to rent the rooms in the lower part of the house. Nothing, however, is quite what it seems.

The narrative is elaborately decorated with period themes and expressions, making it feel like it is set earlier than the 30s in some ways; it recalls the 19th century ghost stories of either Henry or M.R. James. But there are also modern elements that remind the reader that this is actually the 20th century, and there may be more current strangenesses going on... Arthur's new employer is HP Lovecraft, sick and reclusive, and most certainly odd. He gives Arthur some stories of his to read, and they spook Arthur, who is already living in a haunted attic -- he doesn't need any more suggestions of scary things to think about.

The whole story is a puzzling, mysterious and atmospheric read. I sped through it, despite the slower-paced storytelling, because I was trying to figure out what was real or not, what Arthur was really seeing or feeling, and why. None of these questions was definitively answered; the ending left the reader to decide, under a cloud of miasmic realities.

Perhaps I will go back and reread more carefully, to try to pick up those clues I missed the first time around. I'm sure that I'd have a clearer idea of my own perspective on Arthur's experiences if I went through the last couple of chapters again. Even without a definite decision on what I think happened, I really enjoyed reading this. It was creepy, wonderfully period, and a perfect RIP read.

For another creepy tale of uncertain perceptions, and another Arthur alone in an isolated house that holds many terrifying secrets, try Susan Hill's The Woman in Black (definitely read the book, and perhaps then watch this 1989 version of the movie)

John Harding's Florence & Giles is a re-imagined take on Henry James' classic creepy tale, Turn of the Screw. At the end of the 19th century, in a big old house in New England, Florence is reunited with her brother Giles, home from school, and a new governess who is obsessed with Giles...what could go wrong? Told in a similar period tone to The Broken Hours, this is another story in which the reader must decide what is real.