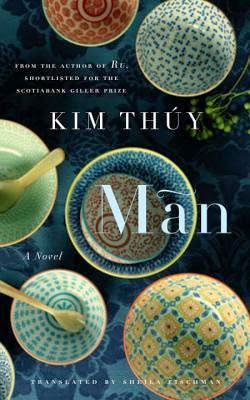 I read this new Canadian novel fairly quickly -- it is quite short, and just like Thuy's previous, award-winning novel Ru (my review here) it's written like brief prose poems following one upon the other. (you can get a sense of her style with this excerpt in Chatelaine magazine).

In this novel, Thuy uses food as a central image in the story. Man, a young Vietnamese girl, has three mothers -- one who gave birth to her, the nun who found her as an infant, and Maman who raised her. When Man is grown, Maman finds her a husband as security. He's a lonely restaurateur in Montreal, and so Man comes to live in Quebec.

Each section of the story has a word in Vietnamese in the margin, a theme for that section. It's followed by the English translation beneath. I thought that was an interesting touch, but, because this was originally in French, and the translation of words (and experience) from Vietnamese to French was such an integral part of Man's story, I would have liked to have seen the Vietnamese to French retained, with the English popped in beneath both.

Nonetheless, the slow, quiet reflections and recollections of Man's previous life colour the story, giving it depth. I was fascinated by the stories of Vietnam and Man's precarious life there, as well as general sociological tidbits like the fact that Northern Vietnamese women traditionally coated their teeth with black enamel. But alongside this strong thread of Vietnam running through Man's thoughts, she's also learning her new culture, and uncovering her passions for food and for one married chef -- the second passion is completely unexpected, and shakes her internal life.

Man's name means "perfect fulfillment" and yet for most of her life she seems to hold everyone and everything at a distance. She doesn't find love in her marriage, just security and a general contentment (and two children). She has trained herself not to disturb her surroundings, to quietly fade into the background and not be noticed. This survival technique has stayed with her throughout her marriage, but when she meets Luc while on a brief stay in Paris as a guest chef, she understands that she has been seen, been noticed, examined, and desired. The sections dealing with her love affair have more physical, sense-based detail, as if the language reflects her deepening awareness of her physical existence. Emotion begins to reveal itself.

This is a slow-paced novel, one that the reader needs to have patience with as it slowly reveals parts of Man's character and circumstances. The language is lovely, with the structure supporting her quiet, poetic style. If you read and enjoyed Ru, you will likely also like this new novel. I enjoyed it, even if Man did feel a bit like a cipher at times; her story is a bit disjointed as she moves between various memories, and the stories don't always follow one another exactly chronologically or even necessarily thematically. But it was a delicately told novel that I'd like to dip into for another taste of her writing now and again.

If you're interested in another story of love and passion and marriages coming undone (or not...), told in a similar style -- short sections following the thought process of the narrator, told in standalone paragraphs or pages -- try the recent Dept. of Speculation by Jenny Offill.

If it's the themes of immigrants in North America, mothers & daughters, and the food that truly intrigues, you might like to try the classic novel by Amy Tan, The Joy Luck Club (be aware however, that Man could fit into one chapter of Tan's more sprawling tale)