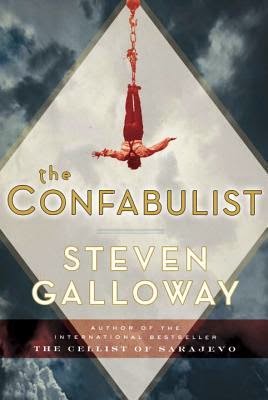 The Confabulist takes on the life of Houdini, re-imagines it, and places it into the context of the confused memories of Martin Strauss, a man who is convinced that he killed Houdini...twice.

Martin is telling us the story of his own life, in brief interludes between longer chapters which follow Ehrich Weiss as he becomes Houdini. It's not quite clear how they will mesh at the beginning, but I was willing to wait to see how they'd be drawn together as the book progressed.

As the story continues, though, it becomes both more predictable and less convincing. Galloway turns Houdini's career into a speculative spying operation, placing Houdini within the circle of many world leaders, and having him play a role in Secret Service operations. I'm not certain if this was supposed to be a reimagining of Houdini by Galloway, or an increasingly strange confabulation of Martin's as he is telling his story of Houdini to a young woman identified, by Martin, as Houdini's illegitimate daughter Alice (but who is obviously someone else, someone easily guessed by the reader, making the ultimate reveal not very enlightening or surprising).

Ultimately, I was disappointed in the read, and bored in the last sections. I should know by now that I am definitely not the market for books featuring real people as primary characters -- it always irritates and bothers me. If I want to know about someone, I'll read a biography. While there is of course no absolute certainty as to the truth of biographies either, at least they are attempting to tell a true story; fiction using real people always feels to me like stealing someone's soul.

Galloway has clearly read a lot about Houdini. He's able to paint a lively picture of the world of vaudeville and stage magicians, an area I really love and have read a fair bit about myself. But the structure and the framing device ultimately didn't work for me. Martin Strauss is a vague character with not enough to him to compel interest; the conclusion is telegraphed too far ahead, and sadly, feels banal to me. I thought that this novel started strong, and was moving along quickly at first, but I got bogged down in the "what is true and what is made up" confusion that overtakes these kind of novels. Not the read for me.
Posted by Melwyk at 5/24/2014 10:00:00 am