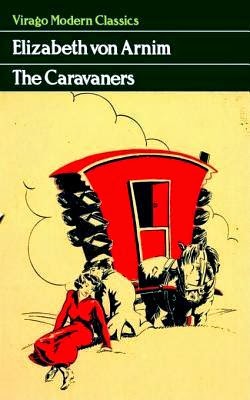 Perhaps I just wasn't in the mood for this one, or perhaps I'm losing my taste for Elizabeth von Arnim's writing. (oh, I hope not). I picked up The Caravaners, hopeful that it would be as good as Enchanted April or Fraulein Schmidt & Mr. Anstruther, and not the crushing disappointment that I experienced with Mr. Skeffington.

It ended up somewhere in between.

It tells the story of Baron Otto van Ottringe, a humourless Prussian gentleman of complete self-absorption, of odious racism, sexism, anti-semitism, pomposity, Germanic self-satisfaction, and any other unpleasantness you may come up with. I get that von Arnim is being sly and witty, skewering him with his own inability to recognize what others think of him, with the mockery that surrounds his presence. The only evidence that he has noticed anything at all comes early on, when he comments that he doesn't think much of a neighbour because:


I do not like Flitz's tone, and never shall. It is true that I have not actually seen him do it, but one feels instinctively that he is laughing at one; and there are different ways of laughing, and not all of them appear on the face.

But this neighbour's sister is a lovely woman, one whom Otto rather fancies. Added to that, he is cheap, so when the Baroness suggests that Otto and his wife Edelgard join her caravaning party for their vacation, they agree. And off to England (the land of the enlightened and sophisticated) they go.

I found that the irony and sarcasm was too constant for enjoyment; it felt like a relentless flood of negativity, one that threatened to engulf any delight in the story. Considering that it was written in 1909, I'm sure that Otto's statements about how much better it would be if German organization and militarism just took over England to sort it out were meant to be amusing -- but as a reader from the other side of two wars, I didn't find it entertaining. His condescension to everyone beneath him on the social scale (including his wife), his currying favour with those he thought were his equals, his pompous sexism -- I just couldn't find the delight in it. There was absolutely no light of self-understanding breaking through on his horizon, and despite the party breaking up after just a week (although the story seemed to be far too full of events to have lasted only a week) he has no idea that it's because nobody could stand him. His poor wife, is all I could think.

Anyhow, if you're in the right mood you might find this amusing. Others have... but I just couldn't warm to this tale. Perhaps I'll try again with one of her other novels soon and try to reinvigorate my fondness for her writing. But for now I'll take a vacation from her pointed and rather cruel commentary in this book, and move on to other choices.