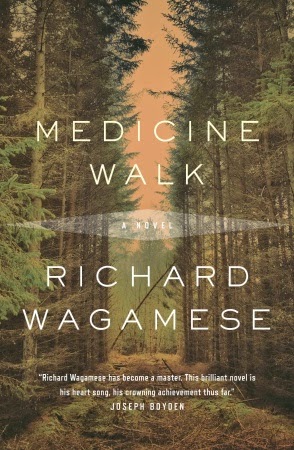 I picked up this book at the library this week; I've been waiting for it for a while now, knowing that Wagamese is a wonderful writer (having read many of his old blog entries as well as other novels) and having heard rumblings that this was the big one for him. I'm so glad I was able to read it this weekend, because it really is a wonderful book.

The storyline is quite simple: Franklin Starlight has been contacted by his father Eldon, who is asking Frank to come and see him. Franklin has been raised by a character known as "the old man", with Eldon only appearing infrequently in his life, and most of those times drunk and unreliable. But Frank rides off to town to visit Eldon anyhow, and discovers that what his father wants from him is a very large favour: Eldon is dying, and wants to die in the wilderness and be buried in 'the warrior way', facing East.

Frank, a very adult sixteen-year-old, takes on this duty, and they begin their lone trek into the mountains. Frank and Eldon are both laconic, not given to emotion or even speaking all that much, but as they go, Eldon begins to tell Frank the story of his life, giving Franklin information about his own past and identity that he had never thought he'd know. The story weaves between present and past, illuminating motivations and reasons behind events. It balances the dramatic present with complex stories of Eldon's own childhood, the traumas that have led him to this point, and gives us background on the estrangement between father and son.  It's gripping, sad, hopeful, pathetic, and more. In a few words, Wagamese is able to communicate so much, and the narrative is rugged and believable.

This is a great Western novel. I'd recommend it to anyone who is a regular reader of Westerns, who is fascinated by strong, silent characters; by a deep description of wilderness and a character fully in tune with the wild; by the code of honour and manliness that permeates this story. I'd also recommend it to those who love a literary novel that looks at how the vagaries of chance shape a life, and the internal struggles of characters isolated in their own psyches.

This novel has been called a masterpiece, and it really is finely constructed and powerful. I was drawn in by the characters of Franklin and "the old man" in particular, and really appreciated how the book encompasses not only the Ojibway characters but all of their complicated pasts, and their present, their familial and chosen ties with many different kinds of people. It feels like a very large book, despite the fact that it's only 246 pages long, and very readable -- it carries the openness of the landscape in it, and provides a vista that is as far reaching as the ridge overlooking the valley that is Franklin and Eldon's final destination. It's an immensely rewarding read that pulls you right into the setting, and into the emotional heart of this relationship. Highly recommended.