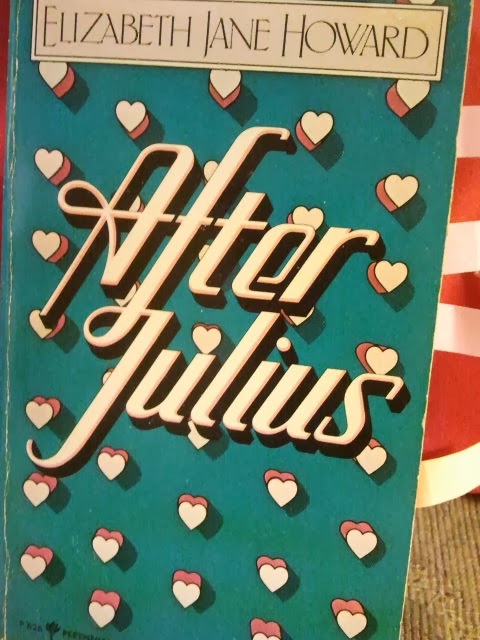 I found this book very engaging at the start. It's told from the perspective of the various characters, each chapter focusing on one person at a time as the story unfolds. We first meet Emma and Cressida, grown daughters of Esme, a 58 yr old widow who still lives in the family home.

Emma is afraid of men and their desires; Cressida (a beautiful war widow) is cynical about them, having multiple affairs with married men. Esme is fairly content, but still has a place in her heart for Felix, her younger lover who left her 20 years previously, at the time that her husband Julius died.

As a weekend with all three women back at home approaches, Felix returns, and at the same time, Emma brings home a stranger she's just met at her publishing firm, Dan. These two men, along with the appearance of Cressida's latest lover and his wife, will shake up the equilibrium that exists in this family.

As I mentioned, I enjoyed the beginning of this book quite a lot. The introduction of the three women was well done, and many of their personal habits were endearing. For example, Emma works as an editor, and her workspace is well described. Esme, at home in the country, has her own daily round:


She nearly always began her day with twenty minutes' cosy dreaming about the past -- not because the whole of her life had been so very happy, so much as that she needed to reassure herself that it had been worth while before starting upon another day... After a time, she would switch on her electric kettle to make tea on the tray beside her bed, and when she had drunk one cup, she would put on her feathered mules and tap downstairs hopefully in search of post. She was a great letter-writer, and her letters were surprisingly shrewd and funny and observant. If there were no letters, she would make lists: lists of people to ask for week-ends, lists of bedding plants, lists of things that she wanted to get mended in London, lists of books she wanted to read, lists of programmes she wanted to hear on the wireless...  ....she could always find something, she had had so much practice.

If the story had stuck to the women, I'd have enjoyed it more, though. Felix is now a doctor, returned from his charity work in Africa. He is obviously meant to be a respectable, upstanding fellow, and he is much less objectionable than Dan, certainly. He simply feels a bit bossy, patriarchal, to me, and his eventual pairing off with Cressida rather than Esme herself recalled this pithy observation from a recent read, Charlotte Perkins Gilman's Herland:


"Woman" in the abstract is young, and, we assume, charming. As they get older they pass off the stage, somehow, into private ownership mostly, or out of it altogether.

Esme is referred to a couple of times as "old" and she is not expected to be on the same level as her daughters when it comes to pairing up. However, she is presented as having lively desire and recollections of past loves that would gladly be fanned into a raging affair with any encouragement. Her sexual longings have not diminished, but the likelihood of fulfilling them within this society certainly has.

It was worth reading for Howard's precise characterizations, for her depiction of this house in the country, and Esme's life in comparison to that of her daughters. In one generation, pre and post war, their experiences are so different.

But now I come to the sticking point, the reason I can't love this book. The men are horrible -- well, particularly Dan. He is a half-starved, homeless poet with a fondness for drink and fighting. When we meet him he is being tossed out of his sister's flat for fighting with her husband. He is (quite pointedly) of a lower class, coming from the boats where his family transported goods up and down the river. His education is lacking and he has antiquated ideas about how women should behave and be treated. Emma, however, seems to be attracted by his very difference, when he appears at the publisher's at which she works, looking for some money. Feeling sorry for him, she invites him to the country for the weekend. After this charitable act, on their return to London, Dan forces himself on Emma, loutishly, and then they get up in the morning and decide that they will get married tomorrow. What??

I suppose it is of its time, but that is why it disturbed me so much. The attitude of men toward women, the limitations of expectations, whether the ones that Dan held, or the instant attraction of Felix for Cressida because she was younger and beautiful, or even the fact that Esme is left alone at the end, of course, she is 58 after all -- this was stifling to read about. That is also why this is an important read; the commonly accepted social attitudes that Howard writes about are only 50 years old, and are still present in many ways. It's always good to have a reminder, however uncomfortable.

The writing itself was quite good, and the story moved quickly along within its structure. There were many astute observations of social relations, and small actions having large import. Howard's style was appealing to me, and so I think I will end up reading more of her work, though I hope that the next one is a little more palatable in its approach to women's roles and relationships.