The Newspaper of Claremont Street 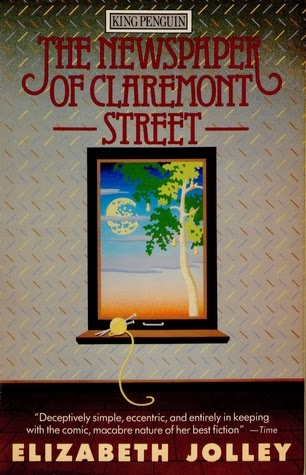 This was an odd tale, and not what I'd expected -- I didn't realize that Jolley was known for the macabre (well, maybe I would have if I'd read the cover blurb first...) I thought it would make a nice change to read a novel from Australia.

Claremont Street is a place with both fancy and grotty homes -- one end is an ugly apartment block and homes broken up into one or two room flats, the other end is fancier homes who hire cleaning ladies from the apartments, like our main character Marguerite Morris. She's been around so long, and in and out of homes so often, that she knows everything about everyone, and shares what she knows judiciously. Thus she's known as Weekly, or the Newspaper of Claremont Street.

Weekly has had a hard life, full of work and struggle. She's always worked as a housemaid, since childhood, when her family immigrated to Australia after her father died. Added to this trouble, she also has a parasitic sociopath for a brother, who causes her many trials. As this story progresses, Weekly thinks more and more about her long-lost brother and her role in their separation. And then she is saddled with a neighbour who is newly widowed and can't function on her own; it's almost too much for Weekly to bear, especially as the achievement of her long-held dream to own land is coming closer...

Though this novel is short, it contains a great deal of texture. Weekly's backstory is fully drawn, as is her character. She works very hard, with a goal in mind, and despite her ridiculousness in the eyes of others, she has an inner life that they know nothing about. The story provides a glimpse into a lonely life, and what keeps someone like Weekly going despite hard circumstances. The writing is measured, the pace quite deliberate. I think this reflects the pace of Weekly's life; keep your head down, work hard, follow routine, until you're able to make your big break. But there are a few fanciful elements that break into the story, moments of grace like this one, in which the evening sun gilds Weekly's ugly flat:


While it was still light, Weekly pulled her chair across to the narrow window of her room and sat bent over her mending. She darned everything she had; the needle was awkward in her fingers because the joints were enlarged with hard work and from an unnamed ailment in childhood. She put on patches with a herring-bone stitch. Sometimes she made the worn out materials of her skirts firmer with rows of herring-boning, one row neatly above the other, the brown thread glowing in these last rays of the sun which make all browns beautiful. Even the old linoleum could have a sudden richness at this time of the evening. It was like the quick lighting up of a plain girl's face when she smiles because of some unexpected happiness. The corners of the room softened in this last sunlight and the herring-bone stitch satisfied Weekly with that pleasure which belongs to creative thrift.

And there is the strange presence of the Russian emigrant Natasya, with her mad insistence of recollections of past grandeur and delusional behaviours today, who is a burden and a responsibility that Weekly takes on unintentionally.

The conclusion of all these elements was rather unexpected, and this where the macabre comes in. The next to last chapter provides a wonderful ambiguous conclusion; sadly, there is a final chapter tacked on, which, while rather black and definite, felt like a late addition that wasn't really necessary. Weekly arriving at her new acreage was all the ending I needed; I prefer guessing which direction the story might have taken after the telling was done.

In any case, this is a brief but intriguing story of a unique character. It's worth searching out for all the social observations and for the character of Weekly herself.