My Life Among the Apes 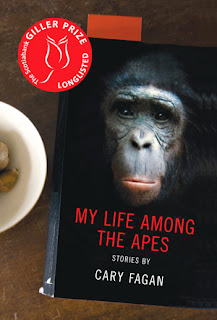 Another book by Cary Fagan, this is a collection of short stories that I read a while ago now, just before his novel A Bird's Eye was released. I'm always hesitant about short story collections -- sometimes I like them, sometimes I don't at all. I find them harder to engage with than novels, generally.

This collection, though, was very entertaining. Fagan's writing is full of energy and fresh detail, and I found it very accessible. There are 10 stories in this collection, some more personally interesting than others, of course, but none that I violently disliked. I found that the stories held together well, no real jarring notes either -- sometimes in a collection all I can think of is that old song "One of these things is not like the other"....

Anyhow, as to the stories themselves. I'll mention a thing or two about a couple in particular that I enjoyed best. The first story, The Floating Wife, may have been my favourite of them all. It deals with a retired judge who is also a stage magician, a theme that reappears in Fagan's novel also. A wife, patient with her husband's collection of magic paraphernalia throughout 43 years of marriage, is dismayed when he begins to make professional appearances after retiring from his respectable job. She leaves him, but because of this never gets the chance to see his masterpiece of theatrical illusion, a trick called The Floating Wife.

The final story, The Little Underworld of Edison Wiese, was quirky, odd and charming. Edison has a job as a waiter in a coffeeshop in an underground concourse, something that his parents despair of. What a menial thing to do! But on a special New Year's Eve, as the lost and wandering are gathered into this shop by chance, his job becomes more like a calling. Quite delightfully odd.

This is a collection that read quickly, and was different from many story collections I've read lately -- things happen, rather than being only thought about. It had some fun in it as well as some sadness. I enjoyed the straight-ahead writing style and found this book very easy to read in just a couple of sittings, not having to put it aside to ponder for ages before picking up another story. So my quick and dirty review, I guess, is that this is a good bet for an entertaining read, with lots of pleasurable oddity to it. The characters are quite complex despite their brief introductions to us, something I also found in Fagan's brief novel. He has a restrained style of presenting very busy lives, whether the characters are busy internally or externally. I enjoyed this one!