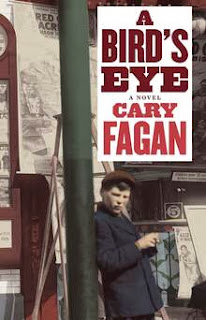 This brief novel is told as if from a bird's eye view: a wide view, zooming in on moments, but covering a span of years. The main character, Benjamin Kleeman, is a young boy growing up in Toronto in the 30s -- he finds his own way in life, discovering street magic early on and following up this passion at the library. His close friend and eventually also girlfriend, Corrine Foster, is a spirited black girloriginally from Chicago, who dreams of becoming a jazz singer someday.

These two performers manage to create a kind of life together, growing up and eventually having to make the decision to either stay together or drift apart. Benjamin makes his choice, and the story ends, but a whole new story is beginning for him, one that I'd love to read.

Although this is a small book full of brief glimpses into his life and that of early Toronto, there is so much resonance in the details. It manages to convey a lot of emotional content and evocative imagery in a few words, giving us both of Benjamin's parents in quick succession, both of whom have a strong reality of their own. There are elements that create a love song to libraries, to passion, even to Toronto, within Benjamin's own personal story. I think that in the hands of another writer this might have become a 600+ page saga, with detail added upon detail, but Fagan's technique of broad strokes carries this book and it is a powerful though small portion!

The writing is really controlled and finely polished, allowing for a lot of memorable phrases -- I found many quotable bits! Here's something that Benjamin says about stage magicians at one point, and it really jumped out at me as something that could apply to many artists of all kinds:

The thing about magic is that it must be taken very, very seriously. If you don't, it can become a joke. This is why so many performing conjurers have an attitude of pompous gravity on the stage. They are, at heart, deathly afraid of being laughed at. They need to be believed in, like Tinker Bell in the famous play, or they will fade away. Even more, what a conjurer needs is for himself to believe. To believe that what he does has a deeper meaning.

I really enjoyed this read. It reminded me of origami in a way: deceptively small in size, the story kept unfolding and unfolding, having much more surface area than appeared at first glance. It had detail and yet left enough mystery in the spaces between what was told to allow the reader to imagine and colour in parts of the tale. To me, that gives a story the power to inhabit the reader's imagination and echo in your memory for quite a long time. This is a book well worth seeking out.