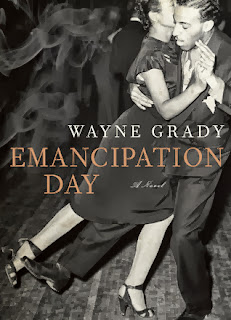 This was an unexpected pleasure, a book about family, trust, identity and race, set in Windsor & Newfoundland right around the time of WWII.

It's the story of Jack Lewis, a young serviceman in WWII who is stationed in Newfoundland, as a member of the band (he plays trombone). He is far away from his Windsor home, and from his coloured family there. He was born "white" and has always thought of himself as such, and so he has spent much of his life and energy trying very hard to distance himself from his family. He doesn't tell anyone that his father is black (or 'coloured', as the term was then). This includes Vivian, the Newfoundland girl he meets and marries while in the Navy. So when she finally meets Jack's family, she is in for a bit of a surprise.

I was really engaged in this book, despite Jack himself being a bit of a cipher. I never felt that I was really getting inside the mental process that made him so insistent on identifying as "white". There were, of course, obvious reasons for his decision -- one, to make life easier on himself. Grady really examines the day to day effects of living as a black person in mid-century Windsor and Detroit -- the comparisons between countries were particularly fascinating to me. But more than a story of one man, this is a story of how colour, race, and identity permeates everything. How does one identify oneself, and what effect does it have on everyone around that one person? On society in general?

Reading this book, I felt like I was learning quite a lot about a story I hadn't heard before. I studied Canadian history, and was still just vaguely aware of Windsor's black community, and the fluidity of movement across the border. Examining the beliefs of different members of Jack's family, and how each of them negotiated their own way through life with both race and gender playing a part, Grady is able to paint a complex portrait of a family. The setting is very strong, and the characters are intriguing.

One of my favourite characters was Vivian -- she fell for the rebellious Jack during the war, and even left her home for him. When they arrived in Windsor, and later while living in Toronto, she accepts the fact that Jack comes from a "coloured" family, and also that he himself refuses to admit this. She gets to know his family and sisters and feels comfortable with all of the complexity around their relationships. Things come to a head when she gets pregnant. She suddenly realizes that she won't know if the child will appear black or white, and that their whole future will depend on the baby's appearance -- not any hard fact of being from a black or white background, or in this case, a bit of both -- but solely on what the child looks like. She works out a scenario for herself, confident that she can live with Jack's mother and sisters and raise the child there -- or, that Jack will accept the baby and they'll focus on a white middle-class life. Which is it? I was on tenterhooks near the end, waiting to see what Vivian would do. Somehow I knew that no matter what, she would survive.

Grady says that this was a novel he's worked on for twenty years, that it has been pared down and edited from a sprawling family saga. At times that shows, as time jumps and the action telescopes. But the other alternative would have been to leave it a massive doorstopper, so I am grateful that the balance of the book has been maintained and provides a great read in its final form. I think this is a fabulous read, one that would also fit nicely into the theme for Canada Reads 2014 -- hope to see it show up there!