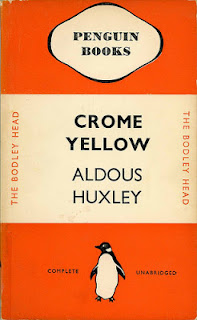 I felt it was time for a classic read, of which many live unread upon my shelves. So I chose this slim volume. This is an odd little read, a British amusement of sorts. Most of the action takes place at a literary house party at Crome, home of the Wimbush family.

Our main protagonist, young poet Denis Stone, is madly in love with Anne Wimbush. She isn't particularly in love with anyone. Other members of the party include Jenny, deaf and scathingly honest in her sketching; Mary, looking for a man to claim as her own; the Wimbush elders; Mr. Scogan, an older and extremely talkative cynic; curmudgeonly artist Gombauld; and popular writer Mr. Barbecue-Smith, who channels his best-selling aphorisms in a trance.

It is quite amusing in parts, with much wry humour and satire of the literary mores of the day. Denis is young and idealistic, and announces that he is working on a novel. Mr. Scogan breaks in with his comments:

Mr. Scogan groaned. "I'll describe the plot for you. Little Percy, the hero, was never good at games, but he was always clever. He passes through the usual public school and the usual university and comes to London, where he lives among the artists. He is bowed down with melancholy thought; he carries the whole weight of the universe upon his shoulders. He writes a novel of dazzling brilliance, he dabbles delicately in Amour and disappears, at the end of the book, into the luminous Future."

Denis blushed scarlet. Mr. Scogan had described the plan of his novel with an accuracy that was appalling. He made an effort to laugh. "You're entirely wrong." he said. "My novel  is not in the least like that." It was an heroic lie.


Many things occur during this holiday. Love is fermenting, virginity being lost, poems unwritten, paintings painted, vicars fulminating, histories of the Wimbush family read out in evenings, a country fair is hosted at Crome for the locals (at which all house guests help out, though Denis seems to be able to absent himself rather skillfully). There is humour both gentle and cutting, there is also a bit of social commentary thrown in via different characters suddenly speechifying. At one point, Mr. Scogan's prediction of the future -- "In vast state incubators, rows upon rows of gravid bottles will supply the world with the population it requires..." -- foreshadows Brave New World.

It was a light read, pointed in some elements and sure to appeal to those who enjoy reading about this era, certainly. I was a bit disappointed in the sudden ending, the unfulfilled denouement, but that is rather the point, considering what Denis was intending for his own novel. In sum, this was a lot lighter fare than I expected from Huxley, and I enjoyed it.