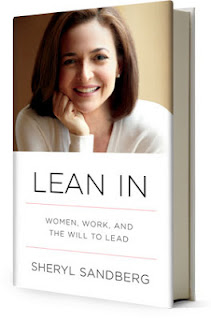 I read this without knowing much about the controversy that surrounded it. I just thought it looked intriguing when it came into the library.

And I must say, I'm not sure what all the controversy is about. She has put together a book full of informative  stories and stats that supports the truth that women not only are held back career-wise by social mores and the infrastructure of the corporate world, but also by the expectations and beliefs that they've internalized as well. She is clear in her introduction about who she is addressing in this book, and thus the content is aimed at that particular audience.

Of course this is a difficult discussion and full of nuance. So not everyone is going to be behind every statement she makes, nor is she even fully consistent with her own arguments. But this is the complexity of life, and Sandberg points out shades and complexities in her experience of success. She also deals quite a bit with combining motherhood with a career, especially mothers with young children. I'd have liked to see a little more discussion directly about women without children, and how they face many of the same struggles. Speaking as a childfree woman in the workplace, there are specific issues about this situation that I'd like to see spoken openly about as well. She does note in the first chapter, however, that not all women want careers, not all want children, and not all want both.

We know that each situation is unique in our working lives, but there are many confluences in how women experience their career paths, and this is what she discusses. There are some common sense discussions on topics like the importance of mentorship, along with a definition of what mentorship is and what young women can expect from it -- hint, it's not handholding and unwarranted promotions galore. There are also some powerful statistics about women's limitations both socially and economically. She states right at the beginning that there are obvious limitations built in to how our society functions, but that there are many books that deal with those, and that her focus is on what holds us back internally.

I don't believe that she is engaging in "blame the victim" thinking in the least. Rather, it was refreshing to get some inside wisdom from someone who has actually been successful in this milieu, to hear how she and others like her have dealt with some of their drawbacks and overcome various issues. Her path won't be everyone's, but she doesn't claim that it is. She is advocating knowledge, both of exterior circumstances and self-knowledge. I agree that the two are inextricably linked, and only by acknowledging both will we be able to move forward.

All around me I sense that the world is less feminist-friendly, less accessible than it seemed to be when I was growing up. We've regressed rather than moved on, in many ways. So, it really struck home when Sandberg says, "It has been more than two decades since I entered the workforce, and so much is still the same. It is time for us to face the fact that our revolution has stalled. The promise of equality is not the same as true equality." I also enjoyed her list of what this book was not, ending with "It is not a feminist manifesto -- okay, it is sort of a feminist manifesto, but one that I hope inspires men as much as it inspires women."

I hadn't heard her TED talk before reading this, and have heard since that the book is essentially a transcript of that talk. So if you've listened to the talk you may not want to read this, but I always prefer having text to refer to. I found this book thought provoking, intellectually sound, and inspiring. And as for all those voices in my head that have always told me to "sit down, you're rocking the boat", I'll now counteract those with Sandberg's simple statement:

"Knowing that things could be worse should not stop us from trying to make them better."