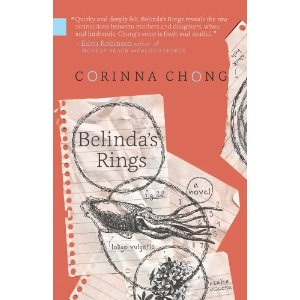 When I first noticed this book in a catalogue at work, I was immediately intrigued. It features two sisters, half Chinese and half English, living in Western Canada. Told from the perspective of the younger sister (or middle child), this book explores what happens when Belinda, their mother, leaves the family to go back to England and explore the phenomenon of crop circles.

Our narrator Grace (she prefers Gray) is a young teen, and speaks like one. She tries to be tough and act like she doesn't care, but she is hurt by what she sees as her mother's desertion of the family. Gray and her older sister Jess, and young half-brother Squid, are left with her stepfather, the unstable Wiley, to fend for themselves. Gray takes on a mothering role, with a few missteps along the way.

Meanwhile, her father is clueless that they are in this situation, despite seeing them for dinners and so forth. These girls are completely on their own.

Gray is an intelligent narrator, fascinated by giant squid in particular, and sea life generally. She peppers her conversation with facts about squid, relying on science for any sense of reliable fact in her life. Her mother, in contrast, "only believes in things she can't see." Belinda is obsessed with alien visitations, particularly crop circles. She decides that leaving her children and going to England to work with some crop circle enthusiasts is a great idea, even if it does mean she might run into her estranged sister at some point. And of course, she does, and it's terribly awkward, and Belinda is even more emotionally stunted than it appeared at first. 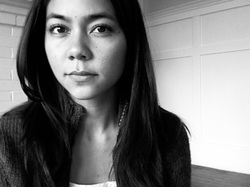 There is a lot going on in this book. Family dynamics, sibling rivalry, crop circles, Gray's scientific facts, relationships, emotional issues, and more. I felt that there was perhaps too much going on, distracting this reader from the primary storyline, having to jump around between the emotional pain of too many characters for my own liking. And Gray's voice sounds reminiscent of Holden Caulfield's, not something I appreciate in many novels, being a non-fan of Holden's.

But as a first novel, it showed a lively style with a strong narrative voice. I enjoyed the setting, and how Chong takes on the story of two half-Asian sisters becalmed in Western Canada. The motif of rings, or circles, echoes through the story. Crop circles, family circles, Belinda's wedding rings that Gray takes to wearing, which leave a physical mark on her skin that reflects her emotional scarring. I also quite enjoyed Gray's fascination with undersea life; she makes the giant squid a mysterious creature, and the impression of the quiet isolation of the deeps in which it lives seems to be another aspect of her interior life.

I was sent this book by Chong's lovely publicist at the Saima Agency and am grateful for the discovery! They are also offering one of The Indextrious Reader's own readers a chance to win a copy for your own delectation. (Canada and U.S. only, please) I`ll draw the winner`s name in a week, in the evening of Tuesday, June 4th.

To enter, simply leave a comment sharing one of your own teenage fixations or fascinations.

As for me: I was not then fascinated by squid, myself, but I did find deep space utterly absorbing, reading astronomy magazines and jumpstarting my interest in astrophysics which continues to this day. What enthralled you?