I'm participating in the Poetry Month Blog Tour, hosted by Serena of Savvy Verse & Wit, again this year. I always enjoy this project, as everybody has such an individual choice to share for each day of the tour. If you haven't been following along so far, you can still go back over the tour schedule and catch up on some pretty great stuff!

The connection these two books have lies in the way they both focus in on women's lives, ones we often hear about only from a male perspective, and give us a first-person view of their experience. 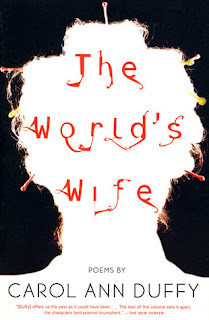 I've read some Carol Ann Duffy before (loved her poem Tea) and so was eager to read this collection when I saw it mentioned by a blogger whose taste I trust.

The World's Wife reimagines the lifestories of women from myth and fairytale. It was fabulous.

Starting with Little Red Cap and going all the way to Medusa, The Beast's Wife, a bevy of "Mrs." and beyond, this was a marvellous, kaleidoscopic reshifting of what we think we know from all the stories we've heard -- none of which are traditionally told from a female viewpoint. These women explain themselves, express how the truth of their lives doesn't quite match up with the stories told about them, or simply comment on their own views of the world. Each poem works beautifully, and I was particularly taken with two, the sonnet "Anne Hathaway", and the final poem, "Demeter".


This last one, in particular, reminded me of a collection I read fairly recently, Demeter Goes Skydiving, and the ways in which that poet, Susan McCaslin, inhabited mythological women like Demeter, speaking from the perspective of this mythical mother experiencing the modern world. I think that this approach to poetry appeals to me quite a bit, and was happy to find Duffy's collection so I could sate myself with extensive examples of such! 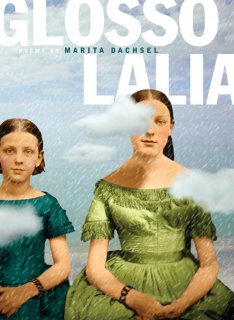 Glossolalia, on the other hand, gives voice to the many historical wives of Joseph Smith. Dachsel is particularly interested in polygamy and the peculiar secretive way it was practiced at the time of these wives' experience. The lives of these numerous women lend themselves to exploration, and Dachsel digs in with imagination and verve.

There were so many wives. There's a list at the back, with ages and dates of marriage, and it's quite overwhelming to look at them all, ranging in age from 14 (ick) to 50's. Dachsel gives them each a specific voice, and yet a combination of 2 voices (one set of siblings) in the same poem was particularly notable. There was one poem by an unnamed wife who refuses to talk, who states that she has "nothing to say to you" -- this anonymous wife seemed to have a certain authority in her silence. Each of these women seems to be justifying her life and decisions from the grave, reminding me faintly of the famous Spoon River Anthology, though these poems are generally longer and sharper than the Spoon River examples.


Their stories reveal various reasons for their decisions to marry Smith. In this early method of polygamy, the marriages were secret, women could already be married with no requirement to leave their current husband to live with Smith, and these spiritual marriages could be as easily dissolved. There were practical reasons, like the oldest wife, who was a sister left alone when her only brother died, married as a kind of favour. There were more specious reasons, as with the youngest girls, with Smith pretending it was all for heavenly glory, ugh.

One of the most fascinating elements was the voice of Joseph Smith's first, original wife, Emma Hale Smith, throughout the book. Her perspective on his religiously permitted philandering was unexpected, and powerful. Notes in the back reveal that she approved of a small number of his marriages, mainly to younger girls who were already servants in their home. The others she either wasn't directly aware of or powerless to stop in fact, though that didn't stop her opinions on them. Here she is, around the middle of the book:

I believe I believed. Joseph,
you were everything
I believed....

A person does not lose faith --
It is not a hairpin or a tooth.
Faith evolves, salvaged.
A grove becomes a house.
A fire becomes ashes.


I loved the creative impulse behind this collection, and the idea was brought to reality with great effectiveness. I enjoyed every minute I spent reading this, and will be going back to reread many parts of it again. I like clever concepts melded with a facility for language and imagery, and this collection delivered. Recommended to anyone interested in modern poetry and/or women's lives reimagined.