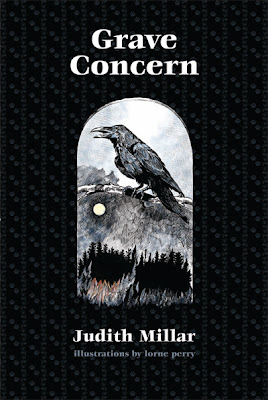 This is a light read, a gothic-comic novel that I came across via recommendation. It's Millar's first novel, though she has written a lot in other areas before.

It's set in Pine Rapids, Ontario -- our main character Kate has returned to her hometown from her life in Alberta after her elderly parents are both killed in a car accident. Despite this dark beginning, the book actually holds a lot of humour.

Kate sets up a grave tending business, Grave Concern, through which she offers to assuage the guilt of absent family members by looking after family gravesites. It's tough to find clients, but it does mean she hangs out a lot in the graveyard, which allows her to be on the scene for many strange occurrences.

What with old high school frenemies who still live in town, the lingering presence of her first true love, a mysterious creature seen only at dusk on the fringes of the graveyard, a talking raven, a handsome newcomer ( he's only lived there 10 years so far), and numerous memories arising from her return, the story has a lot going on. For the most part, it works.

Kate herself is a bit of a mystery to me -- she's approximately in her mid-to-late forties, but often acts much more like a stubborn 20 something. Perhaps it's just all the flashbacks that add to that feel, but especially in a scene near the middle of the book when she and her doctor friend inexplicably hold a huge party for everyone in town, she seems like a not very mature adult!

Nonetheless, this was a funny read that at times felt like it was echoing a gumshoe detective style. Kate is quick with the jokes and sees the oddity in everyday happenings. It was an entertaining look at a fictional small town and what might happen if you did indeed go home again. The slight mystery and the quirky cast of characters blend well, ending up with a story that has a lot of threads but that holds together effectively. It was a quick read perfect for a stormy night!