Henrietta Sees It Through 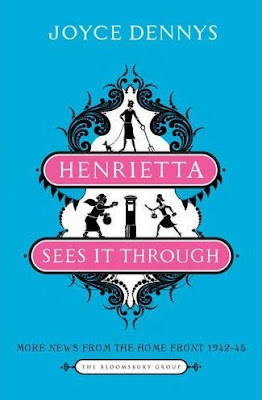 I read Henrietta's War some time back, not realizing there was a part two to the story, until I was unexpectedly given a copy of this one! This book continues the story with Henrietta's letters to her cousin Robert, overseas somewhere. Henrietta lives in the West Country, and is tired of London visitors commenting that "these people don't know there's a war on", especially on the day that a local couple hears that their youngest son has been killed.

The book was published as columns in Sketch during the war, and only published in the 80's collected into book format. Thus there are many concerns that people who didn't know the outcome of the war might be experiencing -- food shortages, short tempers from the anxiety, a fear of lack of elastic and what that might mean for undergarment availability, having to take in evacuees, loneliness (especially of young wives left unsure of what was happening to their husbands), and more.

Despite this, Henrietta has a sense of humour and can always see both the ridiculous and the small delights still to be found in daily life. The book is simultaneously charming and serious, a little heavier than the first volume but still as light-hearted as possible, including the same kind of cartoon sketches that were so entertaining in the first.

There are marriages, engagements, lots of babies (Henrietta's husband Charles is a local doctor so she always knows about these), parties, music, dancing, and even kissing games at one point. The delight the village takes simply in dressing up for a party is palpable, a relief from the self-denial and stoic carrying on that makes up their daily round during these years.

I love reading letters, real or fictional, as I believe the format can create a kind of intimacy and self-revelation that is unique. Here we get to know both Henrietta's fears and her methods for keeping on, told in a delightful way to a friend and relative who is also familiar with the people and surroundings she's talking about. The book ends with a letter announcing the celebration of VE Day, still relatively low-key, but with the whole village out in the streets dancing and singing and lighting a huge bonfire. Soldiers stationed nearby join in, and there is even mention of a Canadian solider in the last couple of pages. It's quite moving though told so efficiently. Following Henrietta and her various friends and neighbours through the war was a lovely experience, both for her humour and her good heart. I'm glad both books were published for us to explore now; the fact of living through this war on the home front shouldn't be forgotten.

(FYI: For an example of life on the Canadian Home Front during WWI, I always recommend Rilla of Ingleside)