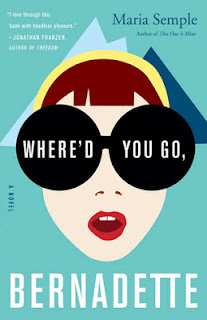 Another epistolary read, this one has been repeatedly recommended to me. I'm sure that most readers will have heard of this one by now -- it's the story of Bee Fox, a rather precocious girl living in Seattle with her currently agoraphobic (and formerly famous) mother and her Microsoft exec father.

It is told in a collection of letters, notes and emails back and forth from the various players in the story -- Bernadette, her virtual assistant in India, crazy neighbours, passive-aggressive fellow mothers from Bee's fancy school, and more, with the addition of a few narrative sections to add information to the story.

Bernadette, formerly a star in the architecture field, has closed herself off from most interactions with the outside world, preferring to stay inside of her rambling, crumbling home. Bee, a brilliant student, has been promised a reward if she gets straight A's (which of course she does) and starts off this tale by asking for a family trip to Antarctica.

With her mother anxious about the entire idea, and her father a busy executive falling into a relationship of sorts with his hyperefficient secretary, Bee's trip doesn't look good. But planning goes ahead, until Bernadette disappears while an intervention is being staged in her kitchen.

The second half of the book follows Bee and her father as they travel to Antarctica and follow Bernadette's trail to try to discover what has happened to her. Father-daughter bonding (and non-bonding) goes on, they discuss Bernadette's place in their lives, we get to see Antarctica even as the sullen teenager Bee ignores it, and get to some emotional depth in Bee's longing for her mother. Finally, a resolution: by chance and daring, Bee and her father take action and find out what has happened.

I liked this book. It was fun, with snappy dialogue, some entertaining characters, great settings -- both Seattle and Antarctica are real places here. The epistolary format perhaps didn't work so well for the entire story, but exposition is really hard to capture authentically solely via the written word, especially in our non-letter writing culture. It was much more normal for 18th century letter writers to go on and on about every detail, since there was no other way that people were finding out information, for example. Still, it was pretty well done, and really creative and entertaining.

What I didn't like so much was the confusion I felt between the characters of Bee and Bernadette. Not only are their names similar, but their voices are as well. They think and speak in the same patterns, and with the same insouciant sarcasm. I couldn't immediately recognize who was speaking in some scenes, despite the fact that one character is a precocious teenager and the other a disappointed adult. Sometimes I felt like the structure and dialogue was just a little too snappy.

So while I didn't adore this one as much as many other readers have, I still enjoyed it and appreciated what it was trying to do. I liked many of the elements and will most definitely be keeping my eyes open for this writer's next book.