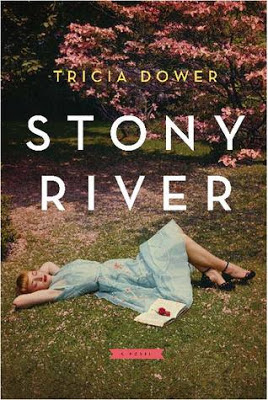 Three girls...three lives...braided together in the small New Jersey town of Stony River, during their tumultuous years of adolescence, and beyond. The 1950's weren't as ideal for those girls as we seem to paint them in retrospect. In fact, incest, murder, sexual assault, family violence, neglect, mental disorders, and poverty are just a few of the elements that feature in this book.

As the story begins, middle-class only child Linda is befriended by the new girl in the neighbourhood, Tereza, slightly older and much more wild. They are playing in the mud near the river when they see police officers escorting a small, thin teenaged girl out of a house that everyone thought the local eccentric man lived in all alone. She is carrying a toddler.

Those three girls interact, their lives intersecting then drawing apart as they grow up in this very small town. None of them have a perfect life. Linda's mother is troubled, and drives her husband to move out and live in a boarding house nearby. As Linda grows up, she is constantly nagged about her weight and appearance, but finally meets an artistic boy from a family on the wrong side of the tracks. They have a platonic relationship but enjoy creating comic strips and hanging around together, until one day he suddenly disappears.

Tereza is a wild child, with a very difficult home life. Her stepfather is a mean drunk, and has particular spite for her. After being beaten too many times, Tereza runs away to make it on her own. She lands on her feet, kind of, in a nearby town, where she's taken in by a young man she's met once to live with him and his grandmother. He is also messed up, fixated on Charles Atlas and pure living, while dealing with anger management issues.

As for Miranda, the ghostly girl who saw the outer world for the first time in 15 years when taken out of her home, she is first taken in by the family of one of the police officers who rescued her. But after a time she is placed in a Catholic orphanage/school and is nearly convinced by the nuns that she has a vocation. Her developmentally stunted child lives with her in the orphanage until he is fostered out, but later returned as faulty. Miranda blends this new world of Catholicism with the eclectic Celtic paganism she was raised with to create her own understanding of religion and spiritual life.

All three of these lives come together in quite an ending. What with courtroom trials and accusations made and innocence forever lost, the relationships begun in the opening pages are severed without any likelihood of being restored. I would have liked the connections between the three storylines to be drawn a little more clearly: they started out closely connected but kept drifting further and further apart as the book progressed, and in the ending I'm not sure that Miranda really had a role to play.

However, Dower is fabulous at keeping each girl's voice and experience distinct. You won't mistake one voice for another. The setting is strongly evoked and can nearly be smelled and tasted. The characters are all rather damaged, and the storylines somewhat sensational. I found it a light read nevertheless -- it didn't hold many surprises, since if you assumed the worst you were nearly always right! As a tale of innocence lost, both personal and societal, this captured the aspirational rosy glow of the 50's while uncovering the squirmy little grubs beneath that hopeful, false front once it was lifted.
Posted by Melwyk at 3/15/2013 09:30:00 pm