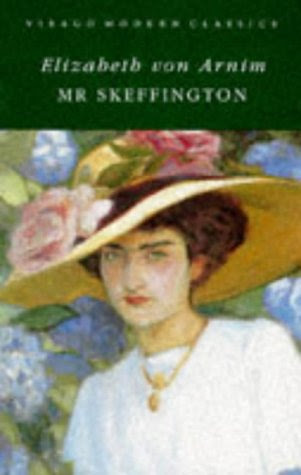 I really like Elizabeth von Arnim. I've greatly enjoyed most of her books, and absolutely loved Elizabeth and her German Garden, Fraulein Schmidt & Mr. Anstruther, and Enchanted April.

So Mr. Skeffington was a big disappointment. It was, in a word, nasty.

The storyline is: Fanny Skeffington has turned 50. She is having a major life crisis, having been a celebrated beauty all her life (and that seems to be all she has ever been). What with a recent serious illness and age itself, she is looking old, and it terrifies her. It apparently terrifies everyone else as well, with people being shocked at her appearance -- how dare she have wrinkles or thinning hair? How dare she look tired, or even slightly mature?

Fanny was married young to Mr. Job Skeffington, a financier much older than her, who she finally divorced after his seventh affair. He was rich, indulgent, and most often noted, a Jew. This is a recurring theme.

The whole story is making a mockery of Fanny's affectations of youth, her desperate clinging on to her young lovers, her desire to revisit old flames to see if she still has IT for them -- of course she doesn't, with men older than her, fat, greyed and boring, all pitying and condescending to 'poor Fanny'.

All of her previous lovers are tedious men, old or young, with one in particular, a minister excessively fond of asceticism, being particularly horrible. She comes across him preaching on a street corner, follows him home and meets his sister, a scared, miserable woman kept hungry and cold and unhappy by his house rules. She takes care of him and all of his wayward souls as well, and only when she sees Fanny treating him lightly (while assuming that Fanny is a prostitute) does she begin to question his dominance of her...but that dies an early death, as Fanny goes away and the sister returns to her previous fatalism.

Another quite awful lover was a flash young gent, back in her heyday immediately after her divorce. He went off to become the governor of some tropical English colony, and is a completely disgusting creature. He comments on the oily greasiness of the skin of all the black women he's bedded while there, he uses the most awful word for the residents of the colony, he wants to marry Fanny now that he's back so he can use all her money to pay off his debts. Despite all of these faults, Fanny is most offended by the fact that he winks at her servant in joke against her.

Fanny's story eventually has a "happy" ending, as she finds a man to take care of her after all -- her long divorced husband, Job Skeffington. Her cousin George tells her she should forgive him all those affairs, as men will have their girls, and arranges a meeting. She is phobic about seeing him again, since what he loved about her was her beauty -- but all is well when she discovers.......he is blind!

This was a melodramatic, unpleasant, trite story unworthy of von Arnim. It has some flashes of her trademark wit, a few quotable lines:


Frankness became rudeness too easily for it ever to be of any real use in conversation.

Life was certainly a queer business,— so brief, yet such a lot of it; so substantial, yet in a few years, which behaved like minutes, all scattered and anyhow.


But in the main, the nastiness overwhelmed the rest of the tale for me, and left me with  a definite distaste for this one. Even if (or maybe especially if) you are currently a fan of von Arnim, really, don't read this.
Posted by Melwyk at 3/13/2013 10:50:00 am