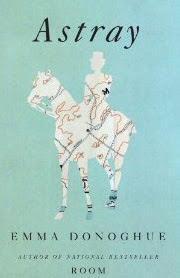 Just finished this collection of short stories, which I loved for many reasons. One, look at the cover. What a colour! And what a neat idea, silhouettes made of maps...very suited to the stories inside, and also giving me ideas!

But more seriously, this book was a fabulous collection. It is a set of stories written over a long period of time which all touch on the same kind of fascination with history and the stories of marginal characters who are in the process of change, of movement of some kind. Donoghue is clearly interested in the hidden, or overlooked, in the historical record.

After each story, she talks a little about the historical event or brief mention that inspired her leap into fiction (in this respect, it reminded me a little of Penelope Lively's Making Things Up). I really liked that, and found the faint spark of a beginning quite intriguing. Of course, in university I did a literature and history degree, so have always been somewhat interested in these kinds of intersections.

However, Donoghue's writing itself is so wonderful that I would have loved this even without the direct historical links. The collection is broken up into three sections, Departures, In Transit, and Arrivals & Aftermaths. Each has four or five stories, which range in topic from the first tale, "Man and Boy", about Jumbo the elephant and his keeper in 1882 London, to the final story, "What Remains", about artists Florence Wyle and Frances Loring, in 1967 Newmarket, Ontario.

There is always change, immigration, or movement (whether geographically or temporally) involved in each story. The strange question of how people end up where they do (a preoccupation of mine) is explored from many different angles, as Donoghue takes characters who are men, women, or sometimes of indeterminate gender, and sets them in mostly North American historical moments, and then imagines what might have happened in that meeting.

I enjoyed the variety of the stories, even while they all held the connecting thread of reimagined history, and a consistency in authorial voice. There were only two that I found a little less interesting, or perhaps more disturbing, and now that I think of it, those two were set in Revolutionary era America, not my favourite setting, so that could have affected my reading. Overall, I thought this was a strong collection that was also very accessible and one that I sped through. It's the first of her books that I've read (I know, I know, I have most of her titles but haven't read any others yet) so I was impressed with how it quickly caught me, and how much I enjoyed it.
Posted by Melwyk at 3/22/2013 02:38:00 pm