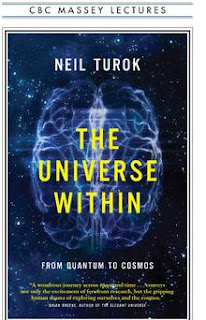 This is the latest in the CBC Massey Lectures series, lectures given by Neil Turok, physicist and head of the Perimeter Institute just down the road from me in Waterloo (if you go to the Perimeter website, check out their extensive video library of 100's of lectures & course presentations - it's amazing -- you can watch Turok present the Massey Lectures kick-off too).

The Massey Lectures are usually pretty interesting, and this was a collection I knew I'd want to read right away, for the subject matter, a topic which intrigues me. I found more than I had expected, as Turok not only talks about the history of physics and scientific discovery, he also makes the case that new scientific discoveries will come from a melding of science with the arts & humanities, suggesting that separating the two does a disservice to both (this idea reminded me of a book I read last year, Intersecting Sets, written by a poet, Alice Major). He also strongly supports increased scientific and mathematical training for all, especially focusing on Africa (he is from South Africa) where he has helped to set up an institute, the African Institute for Mathematical Sciences.

For me personally, I enjoyed the last two lectures the most. The first three were heavily based on explaining the development of physics and various scientific discoveries that support where physics is at now. It was nice seeing some familiar names and reading through his easy-to-understand information, but I do read quite a bit in this area so much of it was very familiar to me. I really began to get absorbed in my reading once I hit lecture #4, The World in an Equation. He talks about how many different scientists' work combines to create an equation that can be used to determine quantum probability (I think...will have to read it again to figure it all out!) Here is an image of the notation used in the book which he then explains bit by bit:

It was fascinating and I found out lots about alternate theories, as well as discovering the name of Emmy Noether, a female scientist from the beginning of the 20th century, an important theorist who I hadn't known of, despite all of my reading. Shocking.

The last lecture of the book is called "The Opportunity of all Time", and is a meditation on the possible quantum future. If we move past our current digital age into the much deeper, faster technology of quantum computing, for example, how will that change human life? He uses science, philosophy and literature to discuss his ideas here, ranging from modern researchers to David Hume to Mary Shelley, with a lengthy discussion of her dystopian novel The Last Man. He finishes with a recommendation that we connect "heart and intellect" to bring disciplines together, and focus on making education available so that the untapped genius of the world can be brought to bear on our future. It was a good read that inspired me to muse upon the connection between science and the humanist ideal of the search for The Meaning of Life.
Posted by Melwyk at 3/10/2013 10:19:00 pm