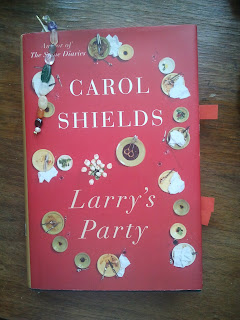 I've owned this book for quite a while now, and finally picked it up to read. I'd heard it had some elements involving mazes and labyrinths in it, which is the main reason I was interested. But I hadn't realized until I started reading how very much the labyrinth is involved in this entire story -- everyone interested in mazes and labyrinths should really read this! Each section opens with a title page and an image of an historical maze -- I enjoyed identifying each one and noting the discussion about the names and forms of mazes and labyrinths in the text. As this is what really struck me about this book, I will review it from my perspective as a labyrinth facilitator and aficionado.

The story is this: Larry Weller, the main character, starts out as a florist in Winnipeg (and the city is given a fairly nice role too). It's the career he sort of stumbled into after high school. He gets married young, and on his honeymoon in England he encounters Hampton Court maze, and it is true love.

He builds a maze in his yard, carefully planting and pruning shrubs to form a design of his own making. His wife Dorrie, unfortunately, dislikes both the maze and Larry's devotion to it so much that she has it partially destroyed. The marriage is also destroyed in the process.

Larry moves out; he finally leaves his floral career to move to Chicago and become a professional maze builder. He meets a new, young wife: they go to England on a Guggenheim fellowship and visit many, many continental and British mazes. Then she leaves him as well.

Larry finally moves back to Canada, this time to Toronto where his sister lives. He finds a new girlfriend and they host the titular party when both of Larry's ex-wives are coincidentally in Toronto on the same weekend. As they all have dinner in a glorious confusion of voices and personalities, Larry realizes some long-hidden truths about himself and about love.

The novel finishes with an excerpt from Bradfield's 'Sentan Wells' (1854), and at this point some of the things that had been bothering me about the story made sense.

Some run the Shepherd's Race - a rut
Within a grass-plot deeply cut
And wide enough to tread -
A maze of path, of old designed
To tire the feet, perplex the mind
Yet pleasure heart and head;
'Tis not unlike this life we spend,
And where you start from, there you end.


If you think of the entire book as a labyrinth, the progression of the story and the manner of telling it are perfectly balanced. The book is made up of various sections, each named "Larry's *whatever*" and this gave me the impression of a set of linked short stories. This impression was made stronger by the constant repetition of certain elements, such as Dorrie's dislike of his maze, or Larry's experience with his father, within many sections. It happened too frequently to be an editing slip-up so I pondered the significance of this initially irritating habit -- and decided that it was representative of the way we think about our lives. Certain stories keep being retold, either to others or in our own minds. We dwell on certain facts and not others.

Then again, looking at the story as a labyrinth, it makes sense that things repeat. As you walk a labyrinth, you circle around and come back to nearly the same spot you were before, just one path over. The perspective changes depending on where you are on the path, and where you are in relation to others who may also be walking the same path. You circle around the central question both coming and going. And as T.S. Eliot said so pithily, "And the end of all our exploring / Will be to arrive where we started / And know the place for the first time."

I'd held off on reading this because (gasp) I am not really a big fan of Carol Shields' style. And here too, I found her style a bit tedious at certain points. The time frame of the book kept me puzzling over where and how the action happened as well. But, Larry's life was full enough that it worked beyond the details. Of course, his fascination with mazes parallels mine so that was enough for me. However, Shields does give us a fairly complicated cast of characters who were interesting on their own, enough that I would like to see this story told from the women's point of view! Using this metaphor, however, shaped the story a little bit artificially, fitting it into the frame neatly. The ending, happy as it might be considered, and concluding with a verse, recalled some of Shakespeare's romances -- all is apparently well and both true love and the power of words have triumphed in the end.

In any case, this book explains Shields' connection with the labyrinth, and is a clear reason for the Carol Shields Memorial Labyrinth that is found in Winnipeg. A fitting tribute.

(there is an interesting discussion of Shields' use of this symbol and its metaphorical resonance in the book "Garden Plots", some of which can be read online via Google Books if you are interested)
Posted by Melwyk at 1/04/2013 09:30:00 am