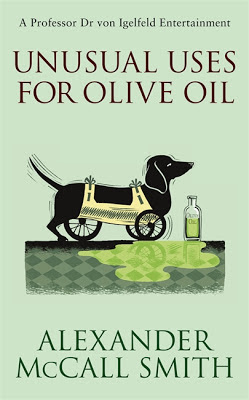 This is the fourth book featuring the hapless Professor Dr Dr Moritz-Maria von Igelfeld. (the first three, from some years ago, can now be found in omnibus format as The 2 1/2 Pillars of Wisdom)

Not much has changed for poor von Igelfeld -- he still has monstrous bad luck and always does the wrong thing. Yet he always comes out of his disasters unscathed. Perhaps that's because he doesn't seem to have the self-awareness to be crushed by the huge gaffes he makes, rather, he is focused on maintaining his touchy position in regards to his co-professor and rival, Professor Unterholzer. He is very sensitive about his level of scholarship as opposed to Unterholzer, and that sometimes leads him to overreact. But, as stated early on in this book, after his suspicions of Unterholzer have been proven false:


There was no doubt that Unterholzer was telling the truth, decided von Igelfeld, as he looked down into his cup of coffee. How complex this world is, he thought; how easily may things appear to be one thing and then prove to be another. And how easy it was to see the worst in humanity when what we should really be looking for is the best.

This book is made up of five chapters, each a tale of von Igelfeld's adventures. From a nascent romance, to a marvellously risqué reading party at a mountain villa, to an awkward dinner with his coworkers Prinzel, Unterholzer and wives (in which poor Walter the dachshund reappears), to a brief moment in the spotlight as an 'inspirational speaker', von Igelfeld reigns as the awkward, unfortunate man he doesn't even realize he is.

McCall Smith terms these books "entertainments", and they are awfully funny, even while they are much sharper and less gentle in tone than his other series. These characters are skewered and I begin to feel sorry for the constant bad luck and disharmony in poor von Igelfeld's life. (that, and the Institute librarian, Herr Huber, does come in for some rather ignominious portraiture as well... which, as a librarian reader, can be a bit much!) I do find these lighter in the sense that there is not much internal deliberation in these characters, as found in his other books. Also, these stories are much more comedic in their reliance on appearances and misunderstandings. Character flaws lead to truly ridiculous situations, which are all too easy to laugh at, under the auspices of the expression "better to laugh than cry".

I do enjoy the shenanigans of these professors, and the idiocy of the infighting is tempered somewhat by the presence of the relatively normal Prinzel, head of the Institute, and his charming wife Ophelia who is very hopeful and sees the best in everyone, even von Igelfeld. If only poor Walter hadn't suffered from von Igelfeld's pride, I'd be more likely to forgive him his flaws... but otherwise, this book is another entertaining foray into the particular German scholarly world that these odd professors inhabit. A fun, light, amusing read with which to start off my reading year!
Posted by Melwyk at 1/02/2013 10:38:00 pm