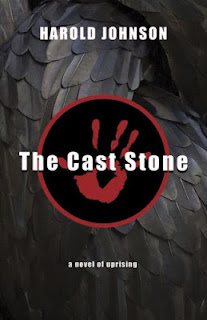 Imagine a world in which Canada has suddenly been annexed by the United States. Imagine American troops invading, and a Canadian underground resistance movement emerging. Imagine this is in Western Canada and Native communities are a big part of the resistance. Imagine this book.

Ben Robe is a retired poli-sci professor who has moved back to his reserve for his retirement. He is pulled back into political life reluctantly when Monica, a former student, engages him in the fight against annexation. There is a strong resistance movement including many long-time activists, former students, native radicals, farmers, and Mennonites. Ben gets involved in one of their meetings, which turns ugly and is a shocking episode which drives home the reality of resistance.

But aside from all this political upheaval, Ben's northern reserve is a bit removed; the people there are not in immediate danger. They remain distant from the struggle, as much as they can, but it eventually comes to them, in many ways.

This was a fascinating read. The dystopian concept was actually handled quite well, with strong characters backing up their differing views on resistance. The community at Moccasin Lake was complex, with many connections between families and friends -- including the appearance of a son that Ben never knew he had -- to make life interesting. Many issues around Native life in Canada are discussed, but in a unique way, thanks to the set up of this book. Ben's community spreads out to include everyone around him, not just relatives but all of the members of the reserve and their hidden lives as well.

The urgency of living in a politicized country and the dignity and strength of each individual (or lack thereof) combine into a powerful story. Some scenes are quite violent or horrible, some are heartbreaking. The setting is finely drawn and the interplay of elements is balanced and keeps the story moving along rapidly. I also found that he didn't draw lines between good/bad, rather, there is courage, honour, and goodness on both sides, just as there is dishonesty, self-interest and cruelty found in both camps.

The only problem I had with this is that it doesn't conclude. It stops. There is much more to tell, to tie up, to complete! I can only hope "part two" will be coming out soon -- I want to know what happens to Ben, to Monica, to the traitor in their midst who is revealed in the last few pages. There are new plot elements opened up near the end which are never concluded, instead, they set up further action to come. I need to know whether Canada is becoming a US territory or not, so I do hope Johnson writes a sequel quickly!

(This is obviously a Candian book but I'm also counting it toward the RIP Challenge, as it has dark and dystopian, speculative elements as well)
Posted by Melwyk at 10/30/2012 10:05:00 pm