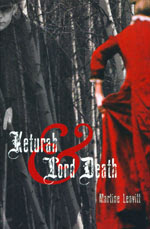 This is one I read after hearing some chatter about it -- plus seeing it at work. The cover is pretty and appealed to me with its colours and font ;)

It's a tale redolent with fairy tale elements. There's Keturah Reeve, main character, a storyteller and beautiful peasant in the small village of Tide-by-Rood in the country of Angleland. There's a fine lord, a king and various roles for the villagers: midwife, baker, tailor, choirmaster and so on.

Keturah doesn't quite fit in; she weaves tales about mysterious animals and more, and one day she sees the great stag of her tales, and follows him into the woods. Of course, she gets lost, and after three days of wandering she gives up and sits down under a tree. Then she meets Lord Death, who has come for her. She distracts him and gains more time by starting a story and promising to reveal the ending later. So she's sent back to the village to find her True Love -- if she doesn't by nightfall, she will belong to Lord Death. Since she doesn't immediately find this Love, she keeps putting off Death by continuing her tale.

There are shades of Scherazade, Beauty & the Beast, various Grimm tales and a generalized historical setting. It's a dreamy story, with Death personified and time rather flexible. For example, Keturah seems to take much more than one day to do all that she is supposed to do before meeting with Death once again. There is much more plot development occurring than seems likely that one day, dawn to dusk, could hold.

I liked it, especially the depiction of Keturah with her two best friends. They are supportive and sweet together, no mean girls in this story. But I wasn't keen on the ending. I could see it coming, and disagreed with Keturah's decision to -- wait, spoilers -- read no further if you don't want to know the ending!

But if you do, just highlight the following:

Keturah decides that her True Love is Lord Death himself. As the end of the story nears, she is feeling more and more distracted and distant from village life and her fellow residents. The lord's son is clearly in love with her but she withdraws and discovers that she is longing to go along with Lord Death and remain still and unchanging along with him. Lord Death admits his love for her (why? her beauty?) and she gives up her life for him. There are all sorts of problems with this for me. If the knowledge that Death is waiting makes life more precious (which seems to be a theme) why then did Keturah not decide to embrace life for as long as possible, to grab on to the opportunity held out to her to 'marry up' and enjoy a long and beautiful life? She knew Death would always be there in the end. Her sense of being distant and apart from everyone around her and then deciding to embrace Death is a terrible example to teens who may be feeling that common teenagery angst -- does every beautiful girl who feels alienated believe she is so special that Death values her over everyone else? Does she then choose Death? I am sure that was not the intended "message" of this book -- in fact, it is quite fantastical and fairy tale-ish so does not need to be read that way. Still, this element bothered me enough that it has been niggling at my brain ever since.

As an antidote of sorts, a great companion read would be Tuck Everlasting by Natalie Babbitt. There would be room for discussion about whether living (or dying) forever, the lure of being unchanged, is enough to give up our mortal existence in all its uncertain glory.
Posted by Melwyk at 10/27/2012 09:00:00 am