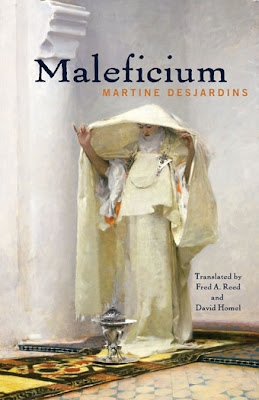 I've read all of Martine Desjardins' books and enjoy her unique voice and choice of odd subject matter. I've finally got a copy of her latest volume, and it is another strong addition to the style of Quebec Gothic which Desjardins is so skilled at.

She seems to take a theme for each book and then elaborate upon it: "ice" for Fairy Ring, "salt" for A Covenant of Salt, and "war + embroidery" for All that Glitters. This title takes on desire and sensuality, framed as a set of 7 tales told in a confessional. The book is framed as the dark revelations of Vicar Jerome Savoie, a 19th Century Montreal priest who has broken the seal of the confessional to record these shocking tales -- and just by opening this mysterious manuscript itself, the reader risks excommunication.

The tales take place in locations like Sringar, Zanzibar, the Arabian peninsula, Yemen, Oman, Shiraz, and Nablus, reflecting a hint of the 1001 Nights. Each one features a male narrator who reveals some kind of physical deformity or affliction and then tells Father Savoie the story of how he came to suffer. Each story turns upon the narrator's encounter with a pale woman marked with a split upper lip, who appears in many guises. The eighth and final tale is an exception to this pattern -- a woman comes to confess and as Father Savoie looks closer, he realizes she has a split upper lip.......

This book is full of mystery, mixing Western scientific and commercial travellers with Eastern settings and customs. There is an abundance of religious imagery, alternated with undercurrents of dark eroticism, sometimes quite explicit. The tone is matter-of-fact even while the story itself is outlandish, horrifying or creepy. It reminds me of the many 19th Century travel narratives detailing a Westerner's experience with the "exotic East", if such a narrative was being told through a Gothic lens. It's a masterful combination of many narrative traditions, with hints of 1001 Nights and some classic fairy tales.  Like all of Desjardins' novels, it appears straightforward in form upon first glance, but Desjardins fills in those forms in a fearlessly dark and gothic manner that is her own unique stamp on all her work.

If you like strange, disturbing tales of revenge, abuse, obsession, desire, greed and more, and can bear reading with equal measures of revulsion and fascination, this book may be your perfect choice.