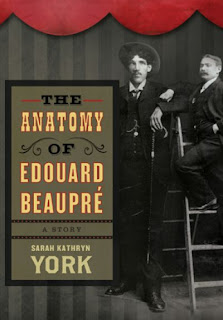 I received a copy of this book from the publisher, Coteau Books. I'm always impressed with their production values, and this was no exception.

The book measures 4.5" x 6", resting nicely in one hand. I find this especially fascinating as this is a novel based on the true story of Edouard Beaupré, the Giant of Willow Bunch. A tiny book about a giant is a pleasing contradiction. But another element of the design is that holding this book in my hand while imagining that it was a regular-sized book gave me a strange moment of feeling a bit like a giant myself; my hand suddenly looked and felt enormous.

I also received this in a lovely package that I only understood the significance of once I'd reached page 24! Here is what it looked like when I opened the mailing envelope: 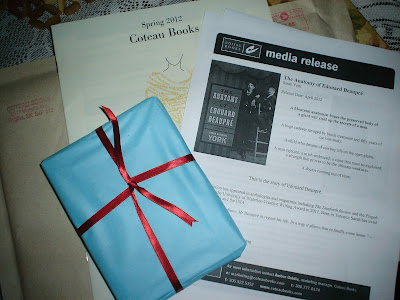 But on to the story itself: this is a look at the life of Edouard Beaupré, a young man from Willow Bunch, Saskatchewan, who grew to 8'3" before he died in 1904 at the age of 23. It includes 8 photographs which serve to reinforce our idea of his startling size. I am actually surprised that this story isn't more well known; I'm from Saskatchewan and I didn't know about him until now.

He grew up on a farm and loved horses, wanting to be a cowboy like his family and friends. But his size denied him that, and he ended up working as a strongman and a giant on exhibition at travelling fairs, until he finally expired after a performance at the St. Louis World's Fair.

This novel imagines what Edouard's brief life may have been like, what he might have felt and what his dreams and desires may have been. York gives him a history and an interior life which makes him into a sympathetic figure. The story of his life is framed by the reflections of Montreal doctor who is examining his preserved body to try to uncover secrets of his growth and functioning as a giant (the doctor was able to do so because Edouard's body was never buried as was promised to his family, but rather embalmed and exhibited by his manager until it finally made its way to Montreal). The doctor's story begins in 1951 and concludes in 1967, and while I enjoyed the idea, I didn't feel it was absolutely necessary to the book: Edouard's life was powerful enough on its own.

This is a good read, based in historical fact and including descriptions of Saskatchewan and Montreal, all of which I love. The presentation is fantastic, and overall I really enjoyed it.

However, due to my longstanding aversion to the use of real people as main characters in fiction, I would personally have preferred this to be narrative history or biography. There was plenty of engaging story to work with, and for me, creative non-fiction would have suited the story well.

Nevertheless, that is my own preference, and doesn't take away from this novel as it stands. Anyone intrigued by this unusual episode from Canadian history will enjoy it -- ranging cross-country and using many historical events and personages, it has a definite Canadian flavour which I liked very much.