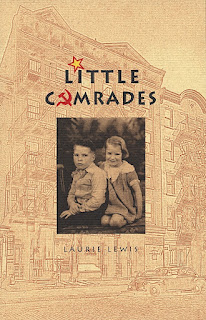 This is a memoir written by Laurie Lewis, at age 80. I recently read it and was absorbed in the reading -- it's the tale of her childhood in Alberta, as the daughter of an important member of the Communist party (and a poor father). She weaves story fragments together in a manner that feels much like an oral history: bits of this and that, shaping a childhood and the characters of her brother and mother especially, in a distinctive voice. There are throwaway lines that suddenly jump out and make you reread them to be sure you really just read that...things I never knew about Alberta or politics in the 30's & 40's. It's fascinating, and full of daily details that make her memories stand out; the smell of the dust, the tired feeling from being away from home all day, the fear in a dysfunctional family setting.

The first section, all about she and her brother as they grow up in this unusual setting, feels as if it is a child relaying the story. There are gaps and fragments and times when it's very much a child's point of view with no adult meaning attached to her experience, no current reframing of the moment being shared. It is curious, and yet fascinating. The fact that her parents are active Communists shapes her ability to feel settled or make friends, so that she and her brother are strongly attached to one another. This part of Canadian history is a part I didn't know a lot about and that in itself was intriguing. Laurie's focus on her mother's situation as a smart, capable woman who was held back by both her husband and the larger Party was also illuminating, if infuriating.

The second section, when Laurie's mother finally decides to leave her abusive husband and they all flee to Toronto, starts to feel more like an adult's story. Laurie is hitting adolescence, and after a while in Toronto, she and her mother move to New York. Then the small details of their shared life begin to shine -- small things like the chairs they're given for their apartment and spend time repainting to make them their own -- the dresses she wore -- the daily round of school, jobs, the relationship between them and the infrequent and random appearances of her brother (who really shouldn't be in the States at all). Her adolescence and sexual awakening are key to this part of the book, and she is unfailingly honest about her own flaws and mistakes. She also highlights the prickly attitudes of a teenager trying to sort out her new life, and I think deserves credit for making her way through it all as well as sharing it all in such a straightforward manner.

After reading this book I'm left with the feeling that Laurie Lewis would be a very interesting person to meet, simply to hear her talk! I'm glad she captured some of her life stories in this memoir, which adds to the growing number of stories revealing women's lives in Canada. If only I could have read it when I was studying history in university.... reading about real women's experience was sadly lacking in my studies, and I sincerely hope that this book makes onto class reading lists! Definitely an original read.