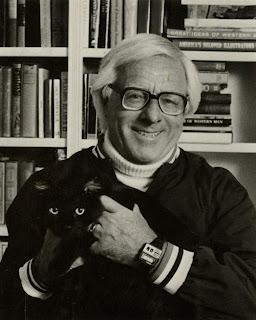 I was hugely saddened this morning to hear that Ray Bradbury has died. I know, I know, he was 91 and had a marvellous life. But still -- I found myself getting teary upon reading the news. I've loved his work for years and find him inspirational. He wrote every day for nearly 80 years, and shared his belief in words, libraries and paying attention to life in constant, strong terms. He was a unique individual, whose writing has affected me in many, many ways. Just thinking of the library scene in Something Wicked This Way Comes gives me shivers. The final line of his short story Zero Hour completely creeps me out; I still scream a little every time I reread it!

The stories that have stuck with me since I read them in grade school, though, are All Summer in a Day and The Pedestrian. They are both short tales but both of them constantly arise in my memory...whenever it's been too rainy for too long, I quote from All Summer in a Day. Whenever I feel too isolated and think we are all amusing ourselves to death, I think of The Pedestrian. But there are so many classics... The Veldt. There Will Come Soft Rains. All of the Martian Chronicles. His novels: Fahrenheit 451. Something Wicked. Dandelion Wine. His nonfiction book on writing: Zen in the Art of Writing. (loved it)

Here's a representative quote that I think shows his writing mettle:


You must stay drunk on writing so reality cannot destroy you....  And what, you ask, does writing teach us? First and foremost, it reminds us that we are alive and that it is a gift and a privilege, not a right.

And as for his well-known support for public libraries:


I spent three days a week for 10 years educating myself in the public library, and it's better than college. People should educate themselves - you can get a complete education for no money. At the end of 10 years, I had read every book in the library and I'd written a thousand stories.

Here, finally, is a quote from Fahrenheit 451, which encapsulates his own legacy, and how I feel about his passing on:

When I was a boy my grandfather died, and he was a sculptor. He was also a very kind man who had a lot of love to give the world, and he helped clean up the slum in our town; and he made toys for us and he did a million things in his lifetime; he was always busy with his hands. And when he died, I suddenly realized I wasn't crying for him at all, but for all the things he did. I cried because he would never do them again, he would never carve another piece of wood or help us raise doves and pigeons in the backyard or play the violin the way he did, or tell us jokes the way he did. He was part of us and when he died, all the actions stopped dead and there was no one to do them just the way he did. He was individual. He was an important man. I've never gotten over his death. Often I think what wonderful carvings never came to birth because he died. How many jokes are missing from the world, and how many homing pigeons untouched by his hands. He shaped the world. He DID things to the world. The world was bankrupted of ten million fine actions the night he passed on.


In honour of all he's written and shaped, here is an hour-long lecture he gave in 2001 all about his writing life. I just watched it last week, enjoying his curmudgeonly individuality. I hope you will find it equally informative and engaging.

Email ThisBlogThis!Share to TwitterShare to FacebookShare to Pinterest
Labels: In memoriam