I noticed this book over a year ago as it came across my desk at work. Isn't that cover wonderful? It certainly caught my attention. Now that I'm into this year's Canadian Book Challenge, in which I've decided to read authors whom I've never read before, I picked it up. Thank goodness for my new self Challenge, because this was so worth it! (extra note: since all the authors I am planning to read are new to me, I'm going to include some biographical information for each one).

I loved this book; it was funny in a deadpan way, the characters were such individuals, the story was odd in a good way, and throughout the book there are discussions of other authors like Voltaire or Nietzsche. I love when books directly reference other books, such fun.

Well, this story begins with outlines of the four members of the Walker family: Harold, nearing fifty and going through a middle age existential crisis; Audrey, superior mother and housewife who also happens to be a bit of a control freak with a deep secret; and their two teenage sons, John and Dylan, who are very teenager-y. They are heading to the funeral of Harold's one time best friend, whom he hasn't seen much of in the last fifteen years. The set-up gives us lots of time to get to know each member of the family, and to show us how very different they all are, and how the worlds they live in are connected yet hold so many secrets that none of the others are aware of. I felt that the first few chapters moved a little slowly, but it quickly picked up and drew me in. The deadpan remarks and thoughts of both spouses regarding the other were funny in a restrained way, and also sadly revealing of a long and normal marriage in which intimacy has perhaps suffered somewhat.

There are so many secrets in this book, and they all begin to go flying as Harold begins to break down to a point that is obvious to all (including his co-workers and supervisor). Audrey resents the extra effort it is taking her to hold the household together, feeling that nobody appreciates it anyhow. Her sons are both taking chances out on their own, getting involved in things that she only has the faintest inkling about. As Paul Quarrington noted in a cover blurb, "the characters are trying to be unremarkable, but remarkable things keep happening to them." I think that captures this book perfectly.

Crazy things are happening to this family; Harold's crisis (plus a few cracks on the head) reveal that he has inherited his mother's 'gift' of hearing the dead, a gift he has never told anyone about. He tries to hide it, knowing that everyone would just think he was crazy. But his actions lead to a forced 'Harold Walker Action Plan' at work, the alternative to taking long-term stress leave. As one of the elements of this plan, he has to seek help. Feeling strongly opposed to seeing a shrink, he makes an appointment to see a Philosopher at the university. I loved this element; Harold feeling out of place at the beginning, while he talks to Will, a young, energetic philosophy professor about the meaning of things. Imagine my delight when at Harold's third visit, Will practices the fine art of bibliotherapy, handing him a copy of Candide to read before their next meeting. And in their following discussion, many of Harold's existential issues find a guiding principle to follow. Very enjoyable, especially because the author never becomes earnest or preachy while Harold has his breakthrough insight about cultivating our own garden in the face of all that is wrong in the world, all that we can not control. She retains her sly sense of humour and light touch in the narrative.

Audrey, meanwhile, has a huge secret of her own, one that she doesn't share willingly. Elder son John crashes their car, which results in a massive lawsuit; younger son Dylan is hiding drugs under his mattress and is convinced he should be an actor, never mind school. Then they find out that Harold has been a victim of identity theft with huge bills left lingering in his name everywhere possible.

Even as one thing after another happens this book remains light, clever and so entertaining. I enjoyed the way that Harold's Gift plays into the storyline and makes everything plausible. I loved the depiction of Harold's aimlessness as he nears fifty, and of Audrey's restlessness and desire for a bigger arena than the kitchen. I love the reappearance of Harold's former best friend (from the other side, of course). Even as the author makes a strong statement about how to live in this world when unexpected, illogical, difficult things happen to us, the story never takes itself too seriously. It is the story of a family muddling its way through modern life, with perhaps a few extra eccentricities, but overall very average. It also offers hope and a new way of looking at daily life in the midst of chaos. I really enjoyed this one. Having gone in to it with no expectations whatsoever, I was rewarded by an entertaining and thoroughly enjoyable read. 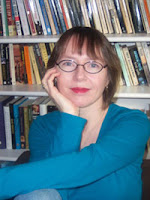 About the Author
Shari Lapeña worked as a lawyer and as an English teacher before turning to writing fiction. She is a graduate of The Humber School for Writers, where her mentor was David Adams Richards. Her first novel, Things Go Flying, was shortlisted for the 2009 Sunburst Award. She won the Globe and Mail’s Great Toronto Literary Project contest, and was shortlisted for the 2006 CBC Literary Awards. She lives in Toronto and is currently at work on her second novel, Happiness Economics.
(information taken directly from Shari's website...check it out)