This week's Meatless Monday post is a review of one of my favourite cookbooks. Enjoy! 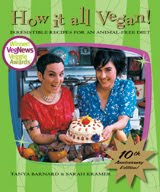 I bought the first edition of this book when it first appeared and fell in love with it then. I was not and am not a vegan, though I've been vegetarian for the last 17 years or so. I lean toward vegan in my eating generally though, and have found that the only cookbooks I've bought in years have been vegan ones. This is one of my favourites.

I received this 10th anniversary edition from the publisher, and eagerly dug in to the new features: a new essay by the delightful Sarah Kramer, colour photos of mouthwatering recipes, and the addition of five new recipes including the sine qua non of Canadian cooking, a vegan buttertart. Best buttertart ever created in the history of buttertarts, in my humble opinion! I've made them for parties at which nobody was aware they were vegan but raved over them. Great, great recipe. Easy and delicious.

Things I love about this book:

Any of the recipes in this book could be easily figured out and tossed together after a long day at work, and satisfy a whole family. Nobody will be picking at their plates wondering what the heck they are eating or feeling deprived. These are vegan meals full of ease, familiarity and there are also sweets! I like how the whole feel of all of Sarah & Tanya's books is one of enthusiasm, giving you a feeling that you are getting a treat by trying out the recipes, not fighting to 'take out' ingredients and deprive yourself but rather that you are honoring your body by giving it more of what is good for it.

You can probably tell I recommend this book! New vegans will find it priceless, and established ones (if they don't already own it...) can find lots of quick new ideas. It is wonderful for non-vegans, even non-vegetarians, who just want to eat less meat, as it doesn't get preachy and alienate anyone who just wants a meatless meal once a week. Rather, as said in the intros, "Life is a gift. Don't be so serious."
Posted by Melwyk at 8/02/2010 08:06:00 am