La Sagouine, or, The Washerwoman 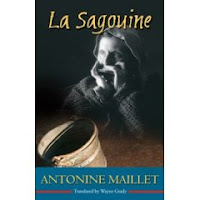 This Acadian classic has just been reissued in a new translation by Wayne Grady. It was a breakthrough when it was first published because it was written using Acadian French, the dialect used by Acadians, giving them a literary voice; it is so reflective of speech that it first appeared as a series of radio monologues. It is a grouping of thematic ruminations spoken by La Sagouine (the washerwoman), on such varied topics as Spring, the Census, or Priests, and has been performed onstage many times. The language is such a major part of this book that there has been some question as to how well a translation can capture the original spirit or intent of the text. I found, however, that I had a real sense of this woman and of the lives of those in her community; she is a straight talker. Her manner of speaking is eerily familiar to my non-Acadian ears, a result perhaps of Wayne Grady's translation, drawing parallels between the poverty of La Sagouine's life and that of others' elsewhere in Canada.
Here are some of my favourites among the pithy things she says:

What I think is that if you want to be happy you got to be able to hope for something better than what you got... It's not having a thing that makes a person happy, it's knowing you're going to get it.

We're not any closer or further from death, just because we got a calendar, and we can't stop the days from passing by just by giving a name to them. Well, maybe we can't stop them, but at least we can watch them go by and know that some of them are better than others.

La Sagouine was such a major part of the upgrowth of Acadian self-identity that she has even inspired an entire Theme Park! Who knew? It's a slick website, offering perhaps another literary place to go if you're already in the Maritimes for some LM Montgomery tourism.

**NB - I had earlier published misinformation!!! I'd misread and claimed it was written in Chiac; not so, an astute reader pointed out, rather it was the quite different Acadian French. That's the great thing about blogging, even when you make a mistake it can be quickly corrected rather than being in permanent print for you to cringe at forever... :)
Posted by Melwyk at 1/15/2008 10:02:00 pm