Starting off this month with a collection of pieces collected nearly a decade ago now. I thought this would be a good collection to read to get a taste of many different Ukrainian women writers. There are 18 contemporary writers included: Lina Kostenko, Emma Andijewska, Nina Bichuya, Sofia Maidanska, Ludmyla Taran, Liuko Dashvar,  Maria Matios, Eugenia Kononenko, Oksana Zabuzhko, Iren Rozdobudko, Natalka Sniadanko, Larysa Denysenko, Svitlana Povaljajeva, Svitlana Pyrkalo, Dzvinka Matiash, Irena Karpa, Tanya Malyarchuk, and Sofia Andrukhovych. And 17 different translators, including editor Michael Naydan. (Full list of the translators can be found in the book preview on the publisher's page for this title).

The only author I'd read before meeting them here was Oksana Zabuzhko, who I really like. It was great to get a feel for so many authors here, and find out who I was interested in and who didn't really catch me. I've now found some translations by some of the authors I liked, although not all -- it's hard to find these authors in translation. I really liked Kononenko so found an ebook of her "A Russian Story", also published by Glagoslav, which I'm currently reading. Despite the title, it's very much about Ukraine. I'll be sharing that one soon.

This book was uneven, though -- some of the works included were short stories but some were excerpts from novels, which I always find a bit iffy. A novel excerpt is kind of out of context and missing the structure to make sense of it; the end of the excerpt is just a stop, not a conclusion. However, they did serve to introduce the writing style and some of the themes of these writers, so there was still value there. The stories range from historical and realistic to fantastical and slightly ghoulish; there are edgy urban writers and folksy ones who look back at tradition and rural life. It's a varied mix indeed.

The book concludes with a list of biographical notes on all the authors, as well a note about the translators. I think this was nearly as interesting as the fiction itself! It was intriguing to learn more about the different ages, regions, and styles of the varied authors.

The biggest weakness of the book, for me, was the editor's intro. Naydan is a professor of Ukrainian Studies, but he's not my favourite source for Ukrainian info. I find his translations clunky and literal, unfortunately, and his take on women writers is a little out of touch, even for 2014. I appreciate that he wanted to highlight some of the new authors and put together an anthology like this that makes their work available to English readers. But his angle can be cringe-worthy, as shown by the last lines of the intro: 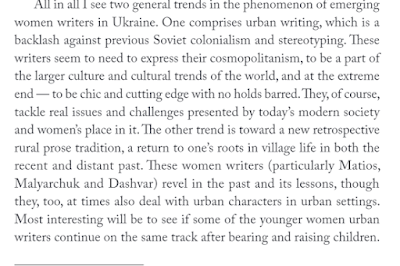 Nonetheless, this is a valuable introduction to many Ukrainian women writers whose work isn't otherwise easy to find. I'd recommend it if you want to get a taste for a bunch of different writers, although hopefully more of their work in translation will be available in future.