Ask for Me Tomorrow


Another Millar, one of a trio I've read recently, this one introduces her detective Tom Aragon, who appears in three novels. It's an interesting mystery, one that was complicated and curious, like many of her stories. It was written and is set in 1976, and has more of a sense of irony than some of the earlier books.

Tom Aragon is a Mexican-American attorney who is now working as a private investigator, and the book is slightly noir-ish. But he's unlike your usual misogynistic, wise-cracking noir detective -- for one thing he has a delightful wife who is busy with her own life as a professor, and he calls her regularly to check in. It's a charming counterpoint to the messed up marriages he's investigating.

In this story, he's been hired by Gilda Decker, a wealthy woman who wants to locate her ex-husband B.J., who has hidden himself somewhere in Mexico after running off with their maid years before. She needs the money he's concealed from her, since her new husband Marco had a stroke on their honeymoon and now needs constant medical care. She hires Tom to go to Mexico and track B.J. down. Obviously, Tom's a good choice -- he can speak the language and knows the lay of the land. But even he is stymied by the fact that every time he gets a good lead, that lead dissolves in a rather final way.

But no matter how many times he returns to Gilda's home (also home to a religious nut of a housekeeper, and a medical orderly for Marco/pool boy who seems rather friendly with Gilda) and tells her he's had no luck, she is convinced he can fix things, and sends him back down again. He takes the job for the money and the belief that he can quickly solve the issues, but it's proving more complicated and involved than he'd first expected.

Millar is a genius at convoluted plots and character building, and this one definitely has a surprise in the final pages that I was not expecting at all. The characters are strong and as twisted and confusing as usual, but I did find some of the earlier novels a little more psychologically compelling. This one feels very 70s so if you're looking for that vibe I'd definitely recommend it. Of course, I recommend reading all of Millar, who is not as widely acknowledged as she should be, in my opinion!

If you read this and figure it out long before I did, let me know -- I think anyone who appreciates a twisty character-driven story will find this a satisfying read.

I'm also sharing this review as part of the #1976Club hosted by Kaggsy Bookish Ramblings. If you like to read by year, check out her list of this and previous club years' reading roundups! 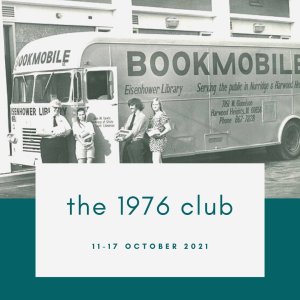