I've been on a bit of a mystery kick lately, started off with picking up some more Margaret Millar. I have this collection of the complete works put out by Syndicate, and I am slowly reading my way through it. I usually only read one at a time, trying to keep some still unread for myself. But this time I couldn't stop and read three in a row! The first is Banshee, one of her later works.

Millar is a psychological writer, and her endings are always unpredictable. Everyone is slightly off balance in many of her works, and that is the case here. People are affected by what happens in her books, they do find tragedy tragic, they react, they break.

In this novel, we first meet Annamay Hyatt, an 8 yr old leading a charmed life. She's a princess attended by her faithful servants, two big family dogs. She has a castle -- a lovely playhouse built by the young architect who also designed the family house, a friend of the family. She is a beautiful child, a delight. Until she goes missing, and her body is found in the woods months later.

This strains her parents' already shaky marriage; her father moves into the garden house, obsessed with doing the investigation that the police can't seem to manage. He is aided by his friend, a local minister who performed Annamay's baptism and also her funeral, and has lost his faith in the meantime. Her grandfather also lives with the family, and he now spends his time staring his pond of goldfish, wondering why he and the fish are still alive at a great age and Annamay isn't. The housekeeper feels she didn't protect Annamay well enough, the architect has his own difficulty with the events while his tawdry girlfriend is angry at his attachment to the family. Even the slightly mad woman kept in a locked house across the fields has heard the Banshee and knows something. And nobody seems to be overly concerned with the way that Annamay best friend and cousin, the slightly older Dru, is dealing with (or not) her feelings about Annamay's loss.

Into this stew of emotion and suspicion Millar adds the town's suspicions, and the strange actions of both odd neighbours and family and friends alike. Every person's life is looked into by the reader, and you're not sure which details are relevant to the mystery itself or are simply the oddity of personal life lived out of sight of anyone else. It's heart-pounding in parts, especially near the end, and I was sure I knew who'd done it, although I was wrong. The ending is a shock, and sends reverberations backward through the entire story and the way it was presented, and implicates the reader through our own suspicions. I haven't stopped thinking about this one since I finished it. Highly recommended. 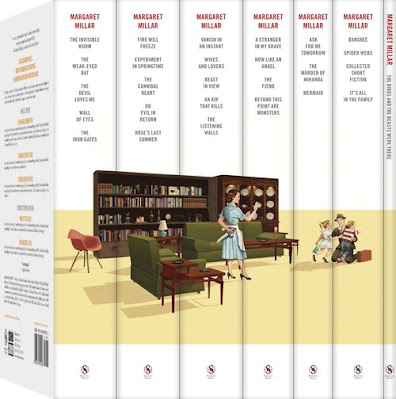