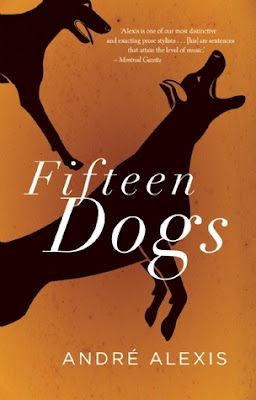 This book has a unique set-up; the gods Hermes and Apollo are drinking in a Toronto pub when they get into an argument that leads to a bet. Apollo thinks that animals, given human intelligence, will end up as miserable as human are, while Hermes says they won't.

So they give human consciousness to fifteen dogs who are overnight boarders at a nearby vet clinic. They bet one year's servitude on the chance that even one of the dogs will die happier than they would have otherwise. And the tale begins...

Each of the dogs has a name and personality, and each of them takes to this new understanding differently. Some of them want to cling to "dog's ways" and live in a pack, while others want to make the most of their new human consciousness. Prince, for example, loves his new linguistic flexibility and becomes a poet. Majnoun develops human relationships and emotional depths, as well as learning to speak some English.

But this ability to think in a human way does not always lead to happiness. Dog life has a dark streak, and the doggish violence and animal nature that blends with the human leads to many tough moments. The dogs still remain dogs, exploring smells and running and finding food sources where they can. They are dependent on humans, who are ignorant of any new consciousness -- despite these dogs having human awareness, the two-way communication is still lacking (something also quite human).

It's thoughtful, poetic, gritty, and very moving at times. Alexis tells the story from the dogs' perspective and it is enthralling. He explores our world, and our perception of it, from a new angle.

I love this sentence from the publisher's write-up -- it captures the essence of this read.

André Alexis's contemporary take on the apologue offers an utterly compelling and affecting look at the beauty and perils of human consciousness. By turns meditative and devastating, charming and strange, Fifteen Dogs shows you can teach an old genre new tricks.

For more tale telling from a dog's perspective, though one with less whimsy in its set-up, try Phoebe's Way by Pamela Ditchoff. It follows a therapy dog as she works in a senior's home, and explores memory and what makes us human in the end.

If instead, you're intrigued by what happens when bored gods make wagers with one another, try Jo Walton's The Just City, a story that begins when Athena and Apollo decide to recreate Plato's Republic with human time-travellers. Knowing that there is something different about being human, Apollo also agrees to live a mortal lifetime in this ideal city. Of course, things don't go exactly as planned. Humans are like that.
Posted by Melwyk at 8/16/2015 05:30:00 pm