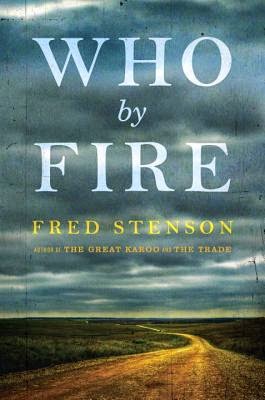 In the mood for a balanced, complex read about environmental issues and family dynamics? Then this is one for you.

In Who By Fire, Stenson follows one farming family whose livelihood is destroyed by the construction of a large gas processing plant on the edge of their property. It begins in 1960s Alberta, with the Ryder family -- parents, 3 kids -- who try to hang on to their family farm while their neighbours are selling up. After months of sour gas, livestock deaths, sickness among the children, and no honest communication from the gas company, they've had enough of the constant stress. But it's too late; their property is now essentially unsaleable.

The story jumps between the 60s and the present, in which young Billy Ryder is now a grown man working in the oil sands in Fort MacMurray. He is a respected engineer, but he is also dealing with his own issues; a gambling addiction, a tentative new relationship, and a conflicted sense of responsibility toward his job and the local community.

I didn't expect to like this as much as I did. The writing is solid, and surprisingly fast-paced for such a dense literary read. I was completely sucked in by this story; while it tackles a big issue, it is extremely honest and balanced, and the action depends on the characters -- it doesn't feel like the idea is driving the plot to the detriment of the story, as can sometimes happen when a book takes on a contentious issue. Rather, Stenson lays out perspectives from many players in this larger story. Billy takes on the role of both affected family and later employee; his mother is tempted by a tentative affair with one of the early plant employees; their community is shaped by their interactions between employees and long-term residents. In Billy's adult life, he's also facing the conflict of what the company wants, and the rights of the local Native community. It's a long book, stuffed full of many kinds of people with different goals and different desires. But looking back at it, I only think about the characters -- they are the point of this one, not the plot.

Stenson's description of rural Alberta (landscape and communities) is both beautiful and honest, and nostalgia doesn't colour his depiction. He is equally dispassionate when he is talking about the events of the 60s as he is when completing the story of Billy and his two sisters in the present. He is not afraid to tackle the lived experience of Albertans affected by the downside of their economic powerhouse, oil & gas. In an interview with the Calgary Herald, when asked about taking one side of this issue, Stenson replied:

I think he's done a fine job of that in this novel.

Highly recommended for readers who enjoy strong, complex characters facing serious change in their life and environment. It's an excellent literary depiction of a Canadian experience that is often overlooked.

To get a feel for this industry, try combining David A. Finch's Hell's Half Acre: Early Days in the Great Alberta Oil Patch for a history of the years 1914 to the Second World War, with Rick Ranson's modern take on oil sands culture, Bittersweet Sands: 24 Days in Fort McMurray.

To get a sense of more character-based Alberta history, try any of Fred Stenson's other novels, most of which are set much earlier, but have the same complex yet straight-forward writing style.