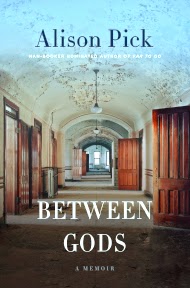 This was an engrossing read -- not my usual kind of book, as it's a memoir of a woman's search for her cultural & religious roots, set amidst a tumultuous period in the author's life.

Pick is living in Toronto, considering marrying her long-time boyfriend and having a child, while suffering from depression and trying to keep writing. She only discovered as a teen that her family was Jewish -- her paternal grandparents escaped from Czechoslovakia in WWII and never mentioned again that they were Jewish. Pick decides that she now really needs to explore this, and she recounts in this book the time she spent seeking a place for herself between the very general Christianity she grew up with, and being Jewish. Technically though, since her mother isn't Jewish, neither is she. And so she must go through the long process of conversion.

There are ups and downs for Pick within this journey of conversion; she finds barriers and difficulties in her road toward acceptance as a Jewish woman. There are also many hard times in her personal life, many revealed in all their soul-baring rawness -- emotional and physical crises that seem far too personal for a reader to stumble upon. But even while I am not a big fan of TMI (one reason that memoirs can be tricky for me) and there may well be TMI in this one, objectively, Pick is an extraordinary writer and her revelations are made in such a way that this reader, at least, never felt like a voyeur.

Pick's family is interesting, and her interactions with them are shared as an integral part of the book's focus.  Her father, in particular, also undergoes a transformation during her own search for her roots. Pick is a literary writer and a poet, and that skill with language shines through in this story. It's beautifully told, with haunting images and metaphors, language that doesn't overwhelm the story, and a clear sense of what's important to tell (there are no wandering, irrelevant digressions). It's a powerful look at the place of religion and cultural identity in modern life, and how knowing -- or not knowing -- our past shapes so much of our personal present. I read this in pretty much one fell swoop; it's hypnotic, a book in which you'll want to read just one more page...until you're at the end. Recommended for those who love well-told, very personal, stories of finding meaning in one's own life.

Readers of this memoir may also want to go back and find Pick's novel Far to Go, which uses themes of the Holocaust and European Jewish life, and which she was writing during the time she relates in this memoir.

If the appeal for you is an author exploring family history which was kept secret for many years, you might try Don Snyder's Of Time and Memory, a story of a son trying to uncover the truth of his mother's life -- a mother who had died when he was 16 days old, and was never spoken of again.