The Back of the Turtle 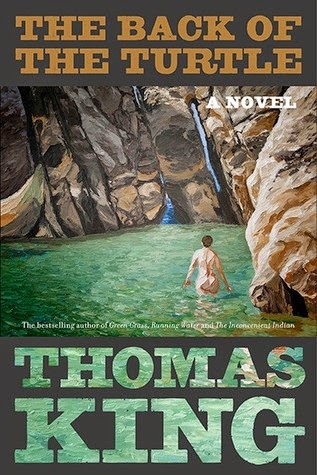 I've been awaiting this novel with great anticipation; I've really enjoyed King's previous fiction, and have had a 15 year wait for this one! Meanwhile, of course, there have been his nonfiction works to enjoy and learn from...but I love fiction. It's quite a beautiful package; the cover suits the book wonderfully, which makes sense, as King's partner Helen Hoy painted it.

In The Back of the Turtle, King has created a kaleidoscopic vision of linked characters telling their stories discretely. It begins with Gabriel Quinn, a bio-engineer who has been working for Domidion for many years. Domidion is a massive multinational whose research, thanks to Gabriel, created GreenSweep, a nasty defoliant which, used in error, kills a river in British Columbia, travelling for miles, all the way to the sea and a further twenty miles offshore. It kills the vegetation, the animal life, and even many human beings living alongside -- including the residents of Smoke River Reserve -- Gabriel's estranged family among them. When Gabriel cottons on to his part in this disaster, he disappears from Domidion.

Gabriel has gone to Smoke River to kill himself. But life gets in the way. He meets Mara, who has returned to the reserve alone after years in Toronto. He also meets local Nicholas Crisp, a trickster figure. All of this happens within the context of a creation myth which they all tell to one another -- The Woman Who Fell From the Sky.

Meanwhile, Domidion CEO Dorian Asher is trying to find his lost scientist. He's also trying to minimize the fallout from yet another environmental disaster caused by his company, this time a breach of a tailing pond on the Athabasca River (wait a second, is this really fiction?) He is fixated on his image, his power, and his money. To survive the stress, Asher pops out and buys expensive new watches, clothes, and even a new condo.

Switching back and forth between these two stories, from Toronto to BC, from rampant, destructive capitalism to a living being trying to take responsibility for his actions, trying to find his place in the world again, is quite effective. We can see how this small group of individuals are connected, and how their circle grows; of course, we can see this in the creation myth as well. And we can see what happens when someone disconnects from the greater community and thinks only of their own benefit and gain. Just as in the creation myth, Dorian and Gabriel are like the two twins of the Woman Who Fell From the Sky -- one builds up and one destroys. There are echoes set up in the story between native mythology, Christian mythology, humanism and more. It's an interesting read, which only occasionally dips too far into political commentary.

I enjoyed the structure, really liked some of the characters, and found the descriptions of Domidion's environmental follies all too stark and realistic. King is encouraging us to do something, to make changes in our world, even while telling us an entertaining, richly peopled story.

While there were a few flaws in the reading, for me -- some of the characters' tics became a bit irritating, the ending was somewhat inconclusive, for example -- as a reading experience it was rewarding. The story is completely embedded in our modern way of life, featuring characters with constant electronic connection but disconnection from the greater sense of Life. Less overtly based in native mythologies than Truth & Bright Water, perhaps, but still steeped in a spiritual recognition of our place in a wider world.

You can listen to a fascinating interview between King and Jian Ghomeshi over at Q on CBC, too.
This is also my first read for the Diverse Universe Reading Event this year!

Motorcycles & Sweetgrass by Drew Hayden Taylor uses the same idea of native mythology coming to life in the modern world, and tells a story of regular people on a reserve who encounter a strange new interloper into their community. It involves historical land use and environmental concerns, but is also full of humour, too!

For a more sombre read featuring the coming-of-age of a Haisla heroine, which also involves the loss of family members, try Monkey Beach by Eden Robinson. This novel is similarly set in BC, and is steeped in West Coast mythology. It features a well-drawn cast of supporting characters.