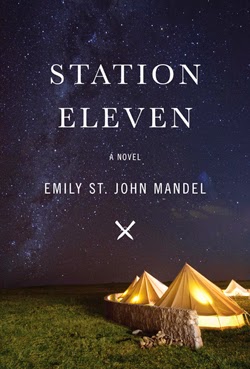 Extraordinary. That's what this book is. So very good.

I've just finished racing through this book, pausing to catch my breath upon finishing, and now I want to start it all over again.

It's not your everyday apocalyptic novel; Mandel resists the easy grandiosity of despair that permeates so many "collapse of civilization" novels. Our world after disaster (this time a virus which kills off  99% of the world population) does not turn into a raging, violent patriarchy. Oh sure, there are some manly lunatics to be found, but Mandel also captures a more nuanced view of our possible future. Art remains, the longing for community remains. Female characters are still people.

The structure of the book supports this complex new world. Beginning in Toronto just hours before the start of the great pandemic, we see Arthur Leander in his last great role, that of King Lear. It's his last part, as he has a heart attack on stage and dies. The paramedic who tries to assist, the little girl (Kirsten) on stage with him at the moment he dies, his ex-wives, his best friend -- they are all part of what follows.

The story jumps back and forth between Arthur's life and Kirsten's life, the before and after of civilization's end. It builds with a slow burn, revealing the connections between characters and events bit by bit. Doing this emphasizes the continuation of life -- it doesn't just start anew after the disaster, parts of pre-virus life are still shaping and affecting the progression of humanity.

But much, much more than just the idea of a post-apocalyptic novel, this book is packed full of beautiful, harrowing images and characters. It's dream-like, elegiac, precise, mysterious, making the reader homesick for the world we haven't -- yet -- lost. What would you miss most? she asks. Whether it's an orange, ice cream, air conditioning, phones, electricity, or the loved ones left behind, Mandel manages to make each character's longings powerful, their memories as real as their new life. Despite -- or maybe because of -- the slower pace of this novel, I was completely drawn in, hypnotized by the structure and the slow revelations and the sudden violence and the horror and beauty side by side. By the losses and by the hope that Mandel allows to remain in this new reality.

Not only this, she uses Shakespeare and the Travelling Symphony to show how art remains, how it sustains. This travelling troupe of actors and musicians carries on the artistic tradition that is highlighted in the book's opening pages. In addition to that, Kirsten carries two self-published comic books, originally created by Arthur's first wife Miranda. They feature Dr. Eleven, named after the planet he lives on after the destruction of earth, Station Eleven. There are obvious resonances between the post-Earth and post-apocalypse settings. But aside from that, it's also incredibly beautiful. Even though the comic is only described in words, I felt like I'd read it myself, could picture the layouts. And the jacket designer for the UK edition has also drawn a two page spread from Dr. Eleven -- brilliant.

I could go on. I could describe the snow falling onstage in the opening pages, or the bread baking in the last pages, the airplane at the edge of a tarmac, the empty house with nothing touched since the virus, an empty airport turned into a settlement of 300 souls... but I'll just say that everyone needs to read this achingly beautiful book. To spend time with these complex, fascinating characters.

While I tend to avoid books that are getting a lot of hype, after reading this, I don't think it has been getting enough hype! It's an amazing achievement, a book I know I'll read again. If you like apocalyptic tales, read this one for a fresh vision on the theme. If you don't like apocalyptic novels, read this one to discover why you just might like one after all. It is exquisite.

While the classic Brave New World by Aldous Huxley has a very different tone, its themes of the power of art and what it means to be human reflect some of the ideas explored in Station Eleven. Huxley also uses Shakespeare to highlight the connection between great art and free thinking.

If it's the beautiful writing and strong characters in a changed world that appeal, move 1000 years into the future and explore the tribal, low-tech world in John Crowley's Engine Summer. Similarly slower paced and nostalgic, it's a short novel full of longing for the old world.

One more random selection: Our Town by Thornton Wilder. Station Eleven is like the dystopian version of Emily's passionate plea "Does anyone ever realize life while they live it...every, every minute?"
Posted by Melwyk at 9/17/2014 10:20:00 pm