Tiger in the Smoke 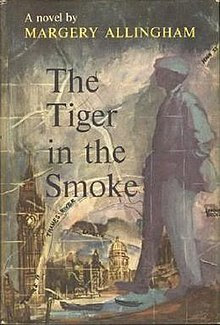 This was a great book. Really, the most interesting of all the varied and interesting crime titles I've been reading lately.

It's set in post-WWII London -- the Big Smoke. Heavy fog plays a continuing role in this story, and Allingham's own description of weather in London reminded me of the opening lines to Dickens' Bleak House:

Fog everywhere. Fog up the river, where it flows among green aits and meadows; fog down the river, where it rolls defiled among the tiers of shipping and the waterside pollutions of a great (and dirty) city. Fog on the Essex marshes, fog on the Kentish heights. Fog creeping into the cabooses of collier-brigs; fog lying out on the yards, and hovering in the rigging of great ships; fog drooping on the gunwales of barges and small boats. Fog in the eyes and throats of ancient Greenwich pensioners, wheezing by the firesides of their wards; fog in the stem and bowl of the afternoon pipe of the wrathful skipper, down in his close cabin; fog cruelly pinching the toes and fingers of his shivering little ’prentice boy on deck. Chance people on the bridges peeping over the parapets into a nether sky of fog, with fog all round them, as if they were up in a balloon, and hanging in the misty clouds.

But in this novel, the fog remains the same while the world has changed; it is now a world that includes damaged war vets, criminal gangs, and murderers, rather than skippers and pensioners. As the story begins, word comes to Albert Campion and Inspector Charles Luke that Jack Havoc, criminal mastermind and psychopath, has escaped from jail and is at large in London. They must try to puzzle out where he is and what his next move is going to be. They never quite catch on though, and that is what makes this book so intriguing.

The story is not a typical detective story, as it is much, much more about the psychology of Havoc, of others who enable him, of class conflict, of trust and betrayal, and the struggle between good and evil in the soul of every character. It's fascinating how each of the characters is drawn for the reader, how the saintliness of one character, Canon Avril, is counterbalanced by the cold-hearted criminal sociopath, Havoc, who has no compunction about killing violently as he feels like it. He is a thorough villain, and yet even he has some background that makes him more than an evil caricature.

There are wonderful side characters (including a gang of unstable misfits who have turned to crime in lieu of any other option) who add complexity to the tale. There is a love story at the heart of the book as well; fashion designer Meg Elginbrodde is about to marry Geoffrey Levett, but someone has been sending her current photos of her soldier husband, who had been presumed dead for the last five years. She enlists her friend Amanda -- and Amanda's husband Albert Campion -- to help her figure out what is going on. These two storylines converge, of course, and we follow the increasingly dangerous behaviour of Havoc as he tries to locate a fabled treasure that is linked to Meg (unbeknownst to her).

I loved the setting of this tale, and the way the characters are drawn. Meg, Geoffrey, Canon Avril, Jack Havoc, and even the new detective Charles Luke, are the strong nucleus of the book. Campion himself plays an important role in the progression of events, but isn't a focus of the story -- he is not the main character whom we follow to solve a mystery. I liked Meg, even with her rather helpless nature; she was one more example of someone involved with fashion and sewing, which I've been coming across a lot in my Century of Reading books, purely by chance but of great interest to me. Clothes actually play a bit of a role in the plot too, and it was entirely plausible that they would.

I really don't want to say much about the plot; it's efficiently constructed and makes a kind of sense, but I'd like to leave it to you to discover. The style is fairly dry and intellectual, to counteract some of the more sensational elements, and I enjoyed that juxtaposition. But the star of this show is the setting, that foggy, dangerous London which reflects the confusion of the story, and which clears as the story does. Allingham's character exposition is also excellent here, and all these elements go together to create a very satisfying thriller. I recommend this one.
Posted by Melwyk at 8/19/2014 10:00:00 am