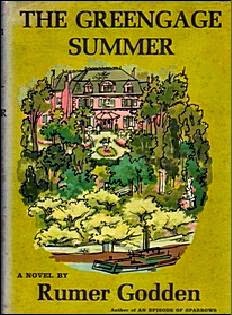 I've read many of Godden's books, though I hadn't got to this title, one of her most well-known ones, until now. I thought that a warm summer's day sitting in the backyard was the perfect environment for this read, and as it happens, I spent an entire day last week reading it (ending up with a little bit of a sunburn to go with it!) My copy is an old green clothbound edition, with a yellow imprint of plums on the front -- it feels vintage.

It's a interesting tale; partly a coming-of-age for our narrator, partly a story of children abroad sans parents, partly a thriller. The Grey family is being taken abroad by their mother, who feels they don't have an appreciation of life and need to tour the war cemeterie
s and battlefields of France to get some perspective. Their mother, who is a bit of a flibbertigibbet, has found a hotel on the recommendation of a local gentleman, Les Oiellets. Just before they leave England, she gets a horsefly bite, which rapidly turns into a serious illness thanks to blood poisoning.

The children manage to get her to the hotel, where a fellow Englishman recognizes how ill she is and pops her into the local hospital, after she has extracted his promise to look after the children. This is certainly one element that dates the story; letting a strange man look after all five of your children! And there is more to this man that is first apparent; his charm has a darker side.

Narrator Cecil, second oldest of five children, is the voice of the story. Her father is a botanist who regularly goes on 3 year expeditions -- he's now in Tibet -- which explains why all of the children are 3 years apart in age. The eldest, Joss, is 16 and blooming into a beautiful young woman, which has a large influence on the plot. She's also a painter. Cecil is 13, a natural observer, and a writer. Her analysis of their experience is clear and unsentimental. The middle child, Hester, is quiet and accepts anything that comes along, and she loves her camera. The only boy, William, known to the family as Willmouse, is 7 and he is fixated on fashion design, and loves Vogue magazine. He spends most of his time in his 'atelier' under a tree in the garden, mocking up dress designs with his sketchbooks and dolls. He definitely sees himself as a designer, scoffing at the idea that he would sew these dresses himself; "they'll be sewn in my workrooms". I hadn't expected this character -- just one more example of fashion playing a role in the fiction I've been reading. And youngest child Vicky, just about 5, is a charming little thing who loves food and captures the heart of the chef in their hotel. Each of these children has their own area of creative expression, something that I find very Rumer Godden-ish.

Also very Godden-ish is the way that all the other characters are cruel, selfish, or warped underneath their social facade. The hotel concierge and owner are both rather malevolent, and the kitchen boy Paul, befriended by the two middle girls, grabs Cecil's breasts at one point and threatens the eldest with sexual assault; and yet they don't speak up or seem to think they can do anything much about it. Rather, they feel sorry for him. The plot and some of the incidents, like these, do much to date this story; it's an example of what's taken for granted in mid-century by these children.

In any case, this story does have a dream-like summer idyll feel to it, a warm drowsiness which hides the danger beneath the calm. The children escape damage, but they do experience violence and threat, some psychological, some actual physical attack. They stick together as a unit, though, and are able to survive. The story comes to an action-filled, police-included conclusion that is traumatic, emotional and unexpected, in light of the slower moving first half of the book. But Cecil gets it all down, and we know from the moments in the story in which the adult Cecil comments on the past that they all move on from this experience.

It's a book that features many children, and yet is not for children. There are adult themes and it carries a sense of recording a lost world, in all its harshness, that might only be appreciated by adult readers. If you like Godden, or are interested in an unsentimental portrayal of the loss of innocence in the early teen years, told in wonderful style, this will be one for you. It's a great summer read.