The Wheel Spins, or, The Lady Vanishes 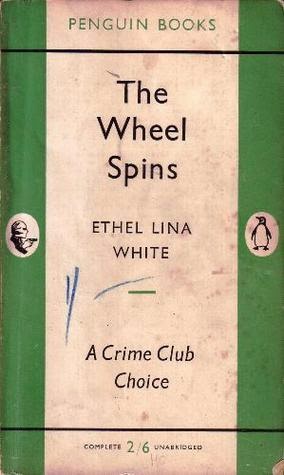 It's summertime. The weather is wonderful, not too hot or humid, and I have time to relax outside. So all I feel like reading is my stack of classic mysteries.

This is one that I've been meaning to pick up for a while now -- it's the basis for the Hitchcock film, The Lady Vanishes. I enjoy that film and have heard that the book is slightly different. I can now say that there are some significant differences between the two!

If you know the movie, you'll find the opening familiar but as it goes along, the plot and especially the character of Miss Froy differ quite a lot. But I enjoyed both the movie and the book. One of the elements that I love is the fact that it's a train mystery, with most of the action taking place in the claustrophobic last train home of the season, from the tiny unnamed European resort that our main character Iris has been staying at with a huge group of raucous friends. Iris has decided to stay behind after they all moved on, but quickly decides it's boring by herself; thus she's completely alone as she heads home.

From the moment she decides to catch this train, nothing goes right. From heat stroke (or something more malicious?) at the station -- nearly missing her train -- getting stuck into a carriage full of strange people -- meeting Miss Froy -- missing Miss Froy -- and then having all the strange people deny that Miss Froy ever existed... Iris is having a bad day.

The rest of the story investigates both why Miss Froy might be a target, and what might have happened to her, and the effect of the denial of reality on Iris' precarious mental state. Iris does not give in to every single other person's insistence that she was imagining Miss Froy, that she is a young hysteric, but determinedly and fixedly believes in her own perceptions. While this situation, added to her original illness, begins to unhinge her, she holds on to that core belief in herself. I found this very powerful. Given that she is proven right in the end, I felt that her character, while flimsy and flippant in the beginning, has been strengthened by this trial. Her character might actually have a chance to become someone in future.

White's characterizations, both of Iris and her friends, and of all the fellow passengers who are drawn in to the denial of Miss Froy for their own various reasons, are fascinating. She examines why people decide to participate in this lie, and how much self-interest affects one's moral ground. Add some suspense, some fun plotting, and enjoyable writing, and this book is truly a great summer read.

The main difference between the book and movie lies in Miss Froy herself. While in the movie Miss Froy is an intrepid English agent, in the book she is what she appears to be... a talkative English nanny who has simply got herself into the wrong place at the wrong time. A nice touch throughout the book is the vision of her parents waiting for her to arrive home for her vacation; they flesh out the rather tiresome and dull Miss Froy herself and create much more sympathy for and understanding of a character who spends much of her time literally missing from the picture.

If you like mysteries from the 30's, or have enjoyed the Hitchock film, do give this a try. It was a truly entertaining read with some very interesting psychological angles as well.
Posted by Melwyk at 7/06/2014 02:04:00 pm